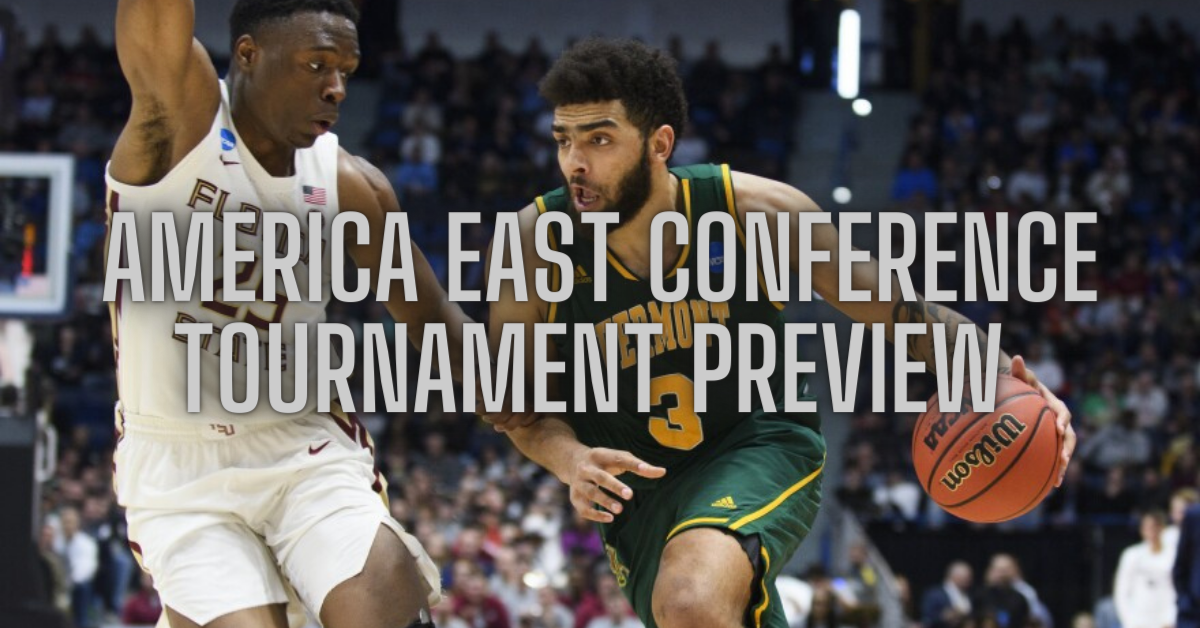 America East has been in the news recently. The conference announced that Stony Brook has been banned from the conference tournament this year, as the school is leaving the America East to join the Colonial Conference. This makes things awfully interesting for the remaining nine teams, as only 8 are eligible for the tournament. Here are my predictions for seeding of the tournament and analysis for each team. Note: All records and trends are as of 2/6.

Overview: With eight games to go and a four game lead on the next best team, it is safe to say that the Catamounts will secure the top seed in this tournament. They are also my prediction to win the America East and represent the conference in the March Madness tournament. How dominant are the Catamounts in this conference you may ask. They are the best team in the conference in terms of points scored (73.6) and points allowed (63.5 – 35th best in the NCAA). Last season’s conference player of the year, Ryan Davis, of the Catamounts is making a statement for a back-to-back winner, as he is averaging 17.7 ppg, 5.9 rpg, and is shooting 58% from the field. Vermont has been dominant all year long, and it’ll take a lot to have them not represent the conference come March.

Overview: Ah yes, the school that busted everyone’s bracket back in 2018, UMBC is having a good season thus far and is hoping to have another shot in March. Joining the squad one year following the crazy upset is their leading scorer, senior Guard Keondre Kennedy. He has been huge for the Retrievers this year, averaging 14.4 ppg, 5.1 rpg, 2.1 apg. He and the rest of the Retrievers squad have won a great portion of their games thanks to the 3-ball, as they are averaging 9 three point field goals made per game, best in the America East and 31st best in NCAA. The biggest problem for the Retrievers is three of their four losses have come to a top 5 team in the conference, all by double digits. The team has the talent to get the job done and make a run in the tournament, but competing against the best teams will need to be key for the Retrievers to have success.

Overview: The Bearcats this season have been the kings of splits in terms of conference play, as all but one of their conference foes that they have faced off against twice, they have split their two games. One thing that hasn’t been difficult for this squad thus far this season: Getting boards. Binghamton is averaging 37.0 total rebounds per game which is the best in the conference. The Bearcats offense this season has revolved around Guard Jacob Falko, who is leading the team in points (13.6), assists (3.3) and steals (1.0). When watching the Bearcats offense, he is always their option #1, and the team is doing everything they can to keep the ball in his hands as much as possible. Could this result in defensive changes and adjustments for other teams down the road? Absolutely. How the Bearcats handle these adjustments will really be a determinant in how they do come tournament time.

Overview: The unfortunate situation for the Wildcats this season is they had a long stretch of four consecutive games that got postponed due to the opposing teams having issues with Covid. Ever since that stretch of postponements, four of their five conference losses have occurred. One thing that hasn’t been affected by this has been their shooting from three this season, as they are shooting 37% as a team from beyond the arc, the best in the America East. They also are getting some talent down low in the post with 6’7’’ Forward Jayden Martinez (14.8 ppg, 5.9 rpg) and 6’5’’ Forward Nick Guadarrama (13.1 ppg, 4.8 rpg). This team is all-around very talented but has been very rusty following that drought. If they can get things rolling again to end the season, watch out for the Wildcats!

Overview: Albany thus far this season has been the classic team of beating teams in the conference that they should, and losing games to the teams that are the best in the conference. All five of their conference losses have come to all of the teams listed ahead of them and Stony Brook. Even out of conference, all of their wins have come to low tier teams or teams that are the worst in their conference. The Great Danes do have some talent on their team, but they do have a clear #1 in Senior Guard Jamel Horton. Horton is similar to Jacob Falko, as he has been leading the Great Danes in points (11.8), rebounds (5.0), and assists (4.0). It is as simple as this: Albany has to win the big games. They have not won any big games all year, but they will not be able to have any success in the tournament without winning big games.

Overview: The Highlanders have been on the unfortunate end of a lot of beatdowns within the America East conference this season, with 6 of their 7 conference losses coming by double digits. However, they do have a couple of very impressive conference wins after beating Binghamton by 11 and Stony Brook by 3. They have struggled to score most of the season, only averaging 64.4 ppg, 3rd worst in the conference. One Highlander that has not had this issue is Senior Forward Miles Coleman who is averaging 15.5 ppg and 6.5 rbg. One individual that has disappointed for the Highlanders was All-Rookie Team member for last year, Mekhi Gray only averaging 5.6 ppg and shooting 25% from 3. NJIT has proven they can beat really solid teams, but they have also shown vulnerabilities in the remainder of the conference games. Depending on the Highlander team that shows up come tournament time will determine if they even have a shot of making it out of the first round.

Overview: The River Hawks are a more impressive squad than the records may show. They defeated a really solid Dayton team earlier this season, and they have been in nearly every conference game this year, with four of their six conference losses coming by single digits. They are also one of the best defensive teams in the America East, as they are only giving up 66 points per game. The River Hawks are leading the conference in steals per game (7.81) and  blocks per game (4.29). Making a case for the All-Defensive team is River Hawks’ Forward Max Brooks, who is rejecting 2 baskets a game. If UMass Lowell can find a way to better turn their defensive efforts into offensive points, they could give a top team in the conference a run for their money.

Overview: To say that it has been a struggle for Hartford this year is definitely an understatement. The Hawks have lost all but three of their games this year by single digits, and just have not shown any signs of being competitive in this league. This is very disappointing as their backcourt has some talent this year. Senior Austin Williams (15.4 ppg, 2.9 apg) and Sophomore Moses Flowers (14.0 ppg, 7.0 rpg) have been outstanding this year for the Hawks. Unfortunately, the play in the paint has been poor this season, as well as rebounding (32.2 rpg, 2nd worst in the conference). It’s going to take a little luck for the Hawks to pull off a first round upset to Vermont, but with the American East, literally anything is possible.

The America East is always competitive in the March Madness tournament. They can hang their hat on the fact that they have a school that pulled off the biggest upset in March Madness history. The remaining teams all have potential to do the exact same thing when they get the chance. With any of the top 4 teams that can pull off an upset, this conference is perfect for March because it is absolute madness.