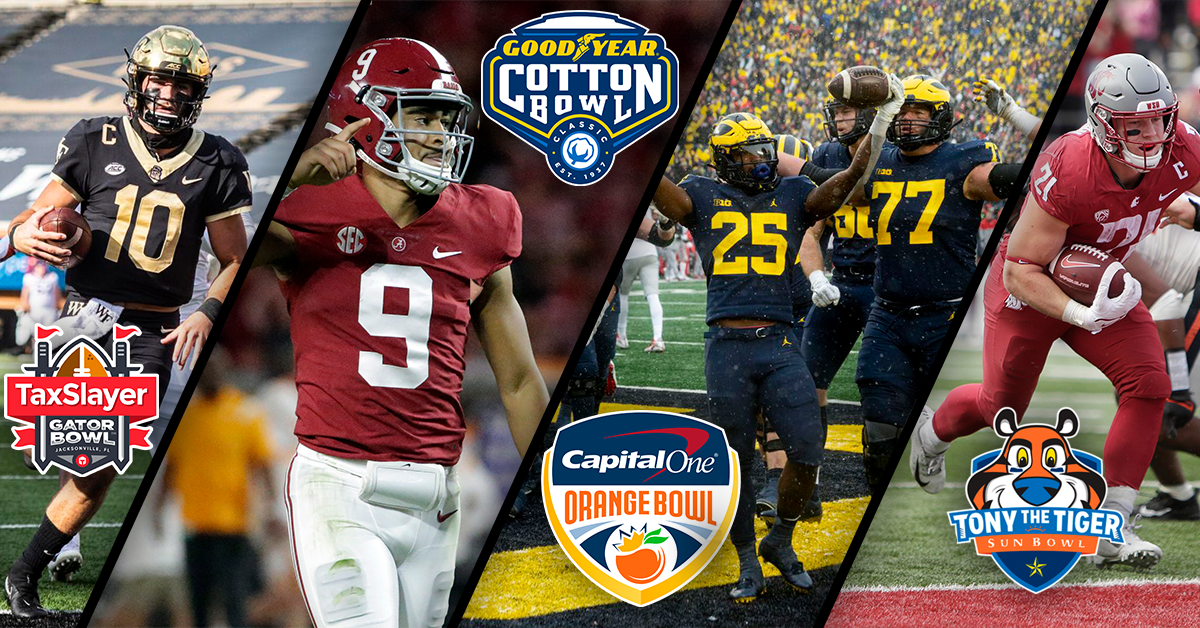 The day is here, folks! It’s CFP Semifinal time, so let’s start with those picks.

I think Bama probably wins this game, but at 13.5 I feel like the back door could be open. That and the sharps reportedly love Cincinnati +13.5. What I do feel like we can rely on is this Alabama Offense. It’s the best offense in the CFP this year, and I think they’ll have no problem putting up points.

A Pac 12 crew is officiating this one, so I expect them to call Defensive Pass Interference a lot on these very handsy Cincy DBs. No doubt the Bearcats have a good defense but facing Alabama is a whole different challenge entirely. Alabama is coming off of a SEC title game where they put up 42 on Georgia’s #1 defense. Cincy may have a good defense, but it’s not close to the talent that Georgia has, and the Tide had no problems putting up points on them.

Alabama will be without John Metchie, one of their best WRs, due to injury. Bama still has Heisman winning QB Bryce Young and that dominant offensive line, so I think they’ll be just fine. The Bama offense averages right around 500 yards per game, so I think we can rely on them to get us some points.

These defenses will travel, no doubt. Two of the best defenses in College Football square off in a very interesting Playoff game. I think there’s a very good chance this game’s first quarter ends at 0-0, and that would be massive for the team getting points.

I’ve already locked in Michigan +9 and plan to sprinkle the Wolverines Moneyline, but those are plays only for the bold. The sharps reportedly love Georgia -7.5 here, and it would seem that Michigan is more of the “public” play.

Both of these teams come in healthy which is a good thing for us viewers at home. First round draft picks will be everywhere on that field Friday Night.

The Wolverines have outscored their last 3 opponents 35-6 in the first quarter. This is Michigan’s first Playoff appearance, I think they come out of the gates fired up and throw the first punch. That’s why the first quarter line makes the most sense to me.

This Wake Forest team will no doubt be playing hard, one last ride for all these super seniors. QB Sam Hartman is a guy we’ve rode with basically all year.

Wake’s offense averages 41 points per game. We have to expect them to be at their best with this being the last game for the main core of this team that almost won the ACC.

Rutgers comes in as a replacement team, because Texas A&M was scared they were gonna catch another loss before the year was over. The Scarlet Knights went 5-7 this year and I’d have to say that the defense led the team. When we look closer at Rutger’s defense we see that they struggled against teams that could throw the ball. They lost to Maryland 40-17, Ohio State 52-13. I’m not saying Wake’s offense is as good as Ohio State’s, but they’ll no doubt be running a lot of the same plays.

We love backing the better QB and the more veteran team. Wake is great!

This game will be played in El Paso, Texas. There is a pretty good chance of rain, but not a ton of wind. These two teams being from Michigan and Washington respectfully, have dealt with conditions like this many times.

We love QB Jaden de Laura for Wazzu, and QB Daniel Richardson for CMU isn’t bad either. MAC bowl overs have still been hot, 6-1 so far this bowl season.

Wazzu does have an interm staff, but they are going to hire that staff as their permanent staff. I love what WSU has done at the end of the season. Pounded rival Washington 40-13 in Seattle, and smoked Arizona too.

Central Michigan has a very solid offense as well and will no doubt be fired up to play in this bowl after the Arizona Bowl got cancelled on them. They took a bus from Tuscon to El Paso to play in this one.

We love MAC overs and we aren’t too worried about a little rain. Let’s go Points!