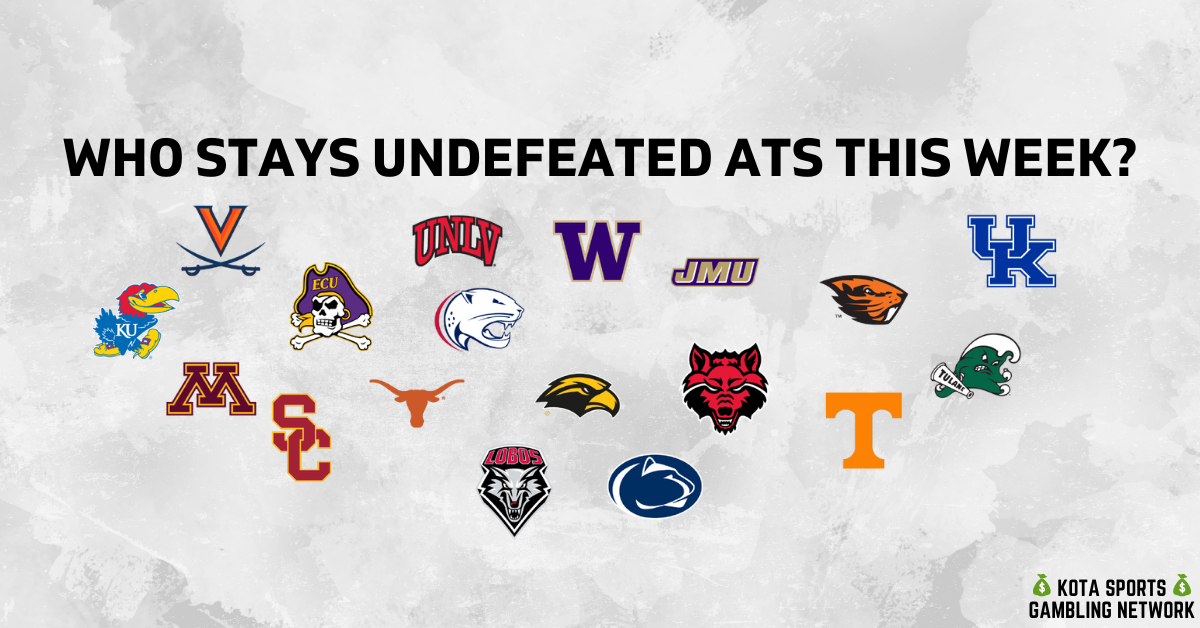 Through three weeks of the college football season, there are only 18 programs that are undefeated against the spread. Of those 18 teams, only one of them has a push on its ATS record and that’s New Mexico (2-0-1).

Here are the 18 CFB teams undefeated ATS through 3 weeks of play.

Let’s rank each undefeated team ATS by their chances of covering this week. Can Minnesota extend its streak to four games against much stiffer competition? Can Kansas keep its hot streak alive against an interesting Duke team? Can USC keep the wagon going? Let’s dive in.

Why? This is a very public play. Apparently, everyone and their step-mother is on Oregon State but 65 percent on the money is on the Trojans. USC is a wagon with covers over Rice (-33), Stanford (-9.5) and Fresno State (-11.5). The Beavers went to USC last season and left with a win. The Trojans are obviously a much different team and to get them at less than a touchdown favorite is why I like this play. Both of these offenses can trade blows but I think USC can finish up a touchdown when the clock hits zeroes.

Why? If I would’ve only bet on Minnesota through three weeks, I’d be up a billion units and I’d easily be winning the CFB Units Contest. Easily! But this is the Gophers first test and it comes on the road. I’m slightly worried about Payton Thorne against this talented Minnesota defense but while the Gophers have looked amazing against three cupcakes, they aren’t forcing turnovers and Chris Autman-Bell is out for the season. I think the Spartans can get this done at home.

Why? Texas Tech has lost four straight to Texas but two of those matchups ended as a one possession game. There’s chatter that Quinn Ewers could be back but it’s also tough to play in Lubbock. TTU quarterback Donavan Smith is a tad inconsistent and he’s thrown five interceptions in three games but can sling the rock. The Red Raiders have to clean up the turnovers and if that happens they can keep this close. Seven turnovers in the last two games combined isn’t good but all the focus is on winning this game this week.

Why? This is the third road game in a row for Arkansas State and the first home game for Old Dominion since its season-opener on Sept. 2. One thing I can’t not bring up is the Monarchs can’t score. ODU is 136th in the nation with 18.3 points per game and ranked 185th with 61.3 rushing yards per contest. While the Red Wolves average 243.7 yards through the air, most of their touchdowns have come on the ground. ODU gives up over 200 yards rushing yards. I like Arkansas State in this spot on the road.

Why? SMU should be hungry after they lost its first game of the season last week to Maryland. I believe in Tanner Mordecai and he’s kept the football away from the defense through the air, which is a bonus. TCU struggled through the first three quarters against Colorado two weeks ago and then let Tarleton State average 8.1 yards per pass last week. TCU quarterback Max Duggan is coming off a five touchdown game but I favor SMU with Mordecai in this contest.

Why? This is a great ATS matchup as both Southern Miss and Tulane are undefeated against the number this season. Now I like Tulane here but also think this could be hangover spot for a team that went into Kansas State and got the win. Southern Miss has used a few different quarterbacks this season but it looks like Zach Wilcke will get the start. Tulane is holding its opponents to 72 passing yards per game and I’m a firm believer in, “If you have two quarterbacks, you don’t have one.” Not super duper confident in Tulane but I have them on my official Week 4 card and I think that defense can do its job and Michael Pratt will bounce back from his two interception game against the Wildcats.

Why? I’ve been big on fading Virginia quarterback Brennan Armstrong and it’s because he’s looked like trash through the first three games of 2022. He has more interceptions than touchdowns and Cavalier fans are still looking for an explosive play through the air. He’s completed just 52.9 percent of his passes and UVA’s offense has only scored 20 points in two FBS games this year. Syracuse is coming off a thrilling win over Purdue but I think the offense can keep rolling inside the Dome.

Why? This play could honestly be higher in my rankings because I’m not super confident in Washington coming off a huge home win over a Big Ten team combined with the fact that Stanford had a bye week last week. The last five matchups between these two rivals have been decided by 10 points or fewer but Washington is the more talented team without a doubt. Maybe we see an upset in a PAC-12 after dark game. I like that the Cardinal are rested and I think this will be closer than what the number says.

Why? This is an official play for me this week and I don’t think Penn State will have any trouble winning this contest. I just think Central Michigan can score enough points to keep this within the number. The Chippewas seem to be putting a new piece to the puzzle each week after opening the season with that high scoring affair against Oklahoma State. There are concerns with CMU’s secondary but how will Penn State come out after its big road win over Auburn?

Why? I understand that games aren’t won in the first half but if you take away LSU’s dominant performance over Southern (FCS), they’ve only scored 13 first half points in the other two games against Florida State and Mississippi State. New Mexico’s defense isn’t an SEC defense but they’ve played well and finished with seven takeaways last week against UTEP. If LSU starts out slow again, does that give New Mexico enough confidence to hang around in the second half? It very well could. LSU wins this game and while I hate to put my hard earned money on New Mexico’s offense, I don’t think this game ends in a blowout fashion.

Why? It worries me some that one of my most confident plays out of the remaining undefeated teams ATS happens to be taking on a rival but I think Tennessee is on a mission this season. It’s hard to back a Florida quarterback in Anthony Richardson that has more tackles than touchdowns, so that’s why I give the Volunteers the nod here.

Why? South Alabama is better defensively than LA Tech but we have to remember what happened to the Jaguars last week. Will that game still be on the Jaguars’ minds? I think two important factors stand out to me in this game. South Alabama is better defensively and they average nearly 175 rushing yards per game. The rushing attack is what I want to key in on. LA Tech has allowed 249 rushing yards this season. Granted they’ve played Clemson and Missouri but while I think the books may be giving South Alabama too much credit, I still feel confident in them to win and cover on Saturday at home.

Why? Who would’ve thought the two teams nobody wanted in the CFB Fantasy League are both off to 3-0 starts? I honestly could’ve ranked this game towards the back end of this list but I think Kansas’ hot start – as impressive as it has been – has too much life in this number. Duke has a accurate and consistent passing game, while Kansas has given up 72 points in the last two games. Both teams are playing really well so far this season. I just think that this ends up being a one score game and I’ll take my chances with the better defensive team.

Why? There’s a reason I’m confident in fading App State this week. While I do think highly of the Mountaineers, at some point a let down has to happen. This App State team has had quite an eventful start to the 2022 season. They barely lost a shootout to UNC to open the year. Then they took down #6 Texas A&M on the road one week later and then defeated Troy on a last second touchdown hours after GameDay set up shop on campus. Maybe I’m reading into it too much but I think this App State team plays a sluggish game against James Madisen this week. With everything that’s happened the last three weeks, I think a Sun Belt opponent can come into Kidd Brewer Stadium and leave with a cover and win.

Why? I like backing teams that have good offensive lines and NIU has some big bodies on that front. Kentucky is no joke as they are off to a 3-0 start with wins and covers over Miami-OH, Florida and Youngstown State. But when you dive into the numbers deeper, the Wildcats have only covered their last two games by a combined five points. They were 15-point favorites against Miami-OH to open the season and won by 24. Kentucky’s defense has the challenge this week of game planning for two NIU quarterbacks because Rocky Lombardi left last week’s game with an injury after he started 7-for-7 and was replaced by Ethan Hampton, who finished 12-of-19 and two scores in the loss to Vanderbilt. While Kentucky is 3-0 this season, they’ve been without Chris Rodriguez and the rushing attack has taken a hit. NIU’s secondary will be the key factor in whether the Huskies can cover this number or not but I think this turns out to be a lower scoring game and because of that I’ll take NIU.

Why? This line is interesting to me because we have a team in UNLV that’s averaging over 40 points per game and Utah State has scored seven points combined in its last two games. Utah State did get throttled by Alabama but they followed that up with a 35-7 loss to Weber State (FCS). Logan Bonner looks way worse than he did last year and even at home I can’t trust this Aggies team. UNLV has both a solid run and pass game and it starts with junior running back Aidan Robbins. He’s averaging 6.5 yards per carry and has a total of seven touchdowns on the season. @DanAngell11’s computer model has UNLV winning this game by 17 points. You can’t always trust a computer but I think UNLV wins this game by at least one score.

Why? I don’t have a lot of hate in my life but the hate that I do is directed right towards ECU. Mostly because they cost me a lot of money when they won the second-half against NC State earlier this season. The Wolfpack were -240 to win the second-half and failed to score in the final two quarters of that game. I’m a bigger man than most, so I’m able to put my hatred aside this week as I’ll gladly give the points with the Pirates this week. Navy wants to run the football. The problem for the Midshipmen is that ECU is pretty good against the run. ECU held NC State to 4.2 yards per rush in its season-opener. They limited ODU’s offense to 1.1 rushing yards per carry two weeks ago and followed that up by holding Campbell (FCS) to 3.1 rushing yards per attempt. Navy is bad and I think ECU’s offense and its balanced running and passing attack can take care of business easily this week at home.