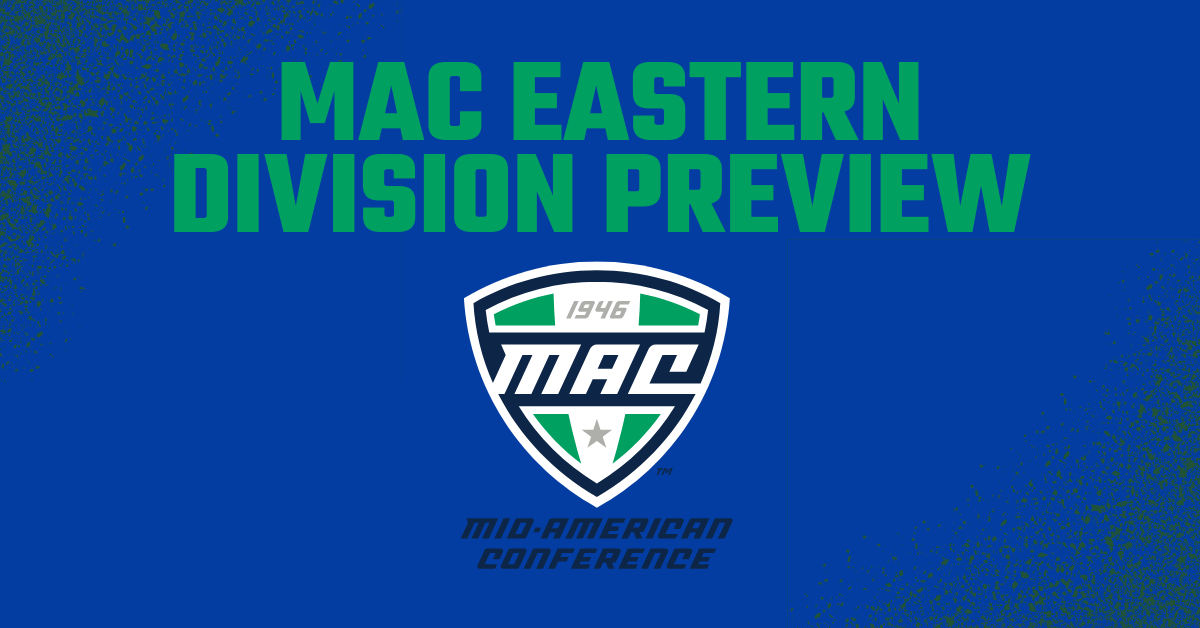 The MAC is one of the toughest conferences to predict, simply because there’s so much parity in the league. Over the past seven seasons, 11 of the 12 MAC members have played in at least one conference championship game, with Northern Illinois and Buffalo being the only teams to make repeat appearances and Eastern Michigan the only one that hasn’t reached Detroit.

The East has been the weaker of the divisions as of late, going 3-8 in the past 11 seasons in the title game and only getting two members to a bowl game last season. But the lesser teams are improving, and this division could be quite a dogfight. Here’s what you need to know about the MAC’s Eastern Division.

The good news is that Akron returns eight starters from each side of the ball. The bad news is that both sides of the ball were a mess a season ago, as Akron averaged just 3.4 yards per carry on the ground and gave up more than six yards per play on defense. The Zips did throw the ball fairly well last season, but their two best receivers and their quarterback from last year are now gone, leaving them with tight end Tristian Brank as the only receiver who managed more than 200 receiving yards a season ago.

On defense, Akron couldn’t stop much of anyone other than Bowling Green last year, giving up at least 31 points in every other MAC game. The Zips haven’t beaten anyone in the league other than the Falcons since a 17-10 win over Central Michigan in 2018, having gone just 2-20 in their past three seasons of MACtion. Joe Moorhead is eventually going to get things moving in the right direction, but there’s just not a lot of talent on this team. I can’t see them finding three wins.

Bowling Green could be a bit of a surprise team this year, given that the Falcons were actually competitive last season and return nine starters on each side of the ball from last year. Bowling Green managed an upset of Minnesota last season and managed four wins for the first time since 2016, major progress given how poor this team has been.

Can the Falcons follow the blueprint of Northern Illinois and reach the MAC title game this season? Don’t count on it. Bowling Green will be better, but a tough draw out of the MAC West (Central Michigan and Western Michigan along with permanent rival Toledo) means that the Falcons are going to have a hard time getting enough wins to make it to Detroit. But making a bowl game is a reasonable goal, and I think that they have a good chance to do it as long as quarterback Matt McDonald continues the progress he showed last year.

Getting a strong performance out of Terion Stewart would also help, as he averaged 5.5 yards per carry and should have the trust of McDonald and the coaches this season. Four wins are all that’s needed to hit this over, and I think the Falcons can get that done as long as they at least beat Eastern Kentucky in the nonconference.

Last year, Buffalo seemed to be in position to pick up where it had left off after three straight winning seasons, but then Les Miles got fired at Kansas and Lance Leipold decided the chance to coach in the Big 12 was an opportunity he couldn’t pass up. With Leipold gone, Buffalo brought in Michigan defensive coordinator Maurice Linguist, and it was clear that he and his players weren’t on the same page. The Bulls won just two league games and the defense was a sieve, giving up 33 points per game.

This isn’t likely to get better quickly in western New York. The Bulls did themselves no favors with the schedule, as seven of their first 10 games will be played on the road and two of the three home games are Miami and Toledo. Facing Maryland and Coastal Carolina in the season’s first three weeks isn’t the way you build confidence with a young team, and getting Central Michigan out of the MAC West along with the Rockets doesn’t help matters either.

For this team to get to its number, it’s going to need the defense to be sharp from the beginning. Games against Massachusetts and Holy Cross are winnable, but after that, it’s tough to see the Bulls finding four more wins against this schedule. This looks like a good bet for the under.

Kent State’s the consensus pick to finish no lower than second in the MAC East, so why is the Golden Flashes’ win total so low? Simple: coach Sean Lewis basically scheduled three losses in the non-conference by putting Oklahoma, Georgia and Washington on the slate. The Flashes should have no problems with Long Island, but realistically, it’s going to take a lot for Kent State to be any better than 1-3 when MACtion begins on Oct. 1.

There’s another problem here: only four starters are back from last season’s offense, and quarterback Dustin Crum isn’t one of them. For this offense to thrive with new quarterback Collin Schlee under center, a lot is going to depend on how well the new offensive line adjusts to playing 300 miles per hour in the FlashFAST offense and how well returning back Marquez Cooper and receiver Dante Cephas handle their responsibilities. Kent State is not going to shut down many teams (other than Akron’s inept offense, Bowling Green was the only one to fail to score at least 27 on the Flashes), which means that the offense has to be outstanding in order for this team to pick up wins.

I’m not sure it’s going to happen this time around. Kent State has to go to Miami and adds Toledo to the schedule, which means that either the Flashes have to figure something out on the road or they’ve got to again go 5-0 at home in order to hit their number. I don’t think this offense is up to the challenge this year. Kent State has a lot of pieces in place to make a run in 2023, when Schlee and his weapons should all be back, but this year, this team seems like it’s a season away from meeting expectations. I wouldn’t play this over/under.

An overtime loss was all that kept Miami from reaching the MAC title game last season, and the RedHawks have most of the offense back from that squad as well as the fact that their toughest games came away from home. Neither Miami nor Kent State lost a game in their home stadiums last season, and this year, the RedHawks get the Golden Flashes at home. They also see the schedule beef up from the MAC West, as they lose Eastern Michigan and Central Michigan and instead get Western Michigan and Northern Illinois.

Throw in that only five defensive starters return from last year’s team, and November MACtion is likely to be full of shootouts when Miami is involved. One thing that will hurt the RedHawks is that one of the missing starters on offense is wide receiver Jack Sorenson, who hauled in 76 passes for 1,406 yards and 10 touchdowns last season. But outside of that, Miami has an experienced quarterback in Brett Gabbert and a stable of backs that could really do some damage to tired defenses. Kenny Tracy and Kevin Davis both averaged 5.5 yards per carry as freshmen, and if either one wins the start, they could become a breakout star.

The big question here is whether Miami can do enough away from Yager Stadium to hit its number. The RedHawks should do very well at home, but they’ll probably need to beat both Bowling Green and Akron on the road to beat their number this season. Games against Kentucky and Cincinnati don’t look winnable, and while Northwestern is beatable, the RedHawks will have to do a lot right to pull it off. I’d take the over, but I wouldn’t put a lot on it.

The Bobcats got better as the season went on last year, even if they only managed three victories. With nine starters back on defense and no Central Michigan or Toledo on the schedule this year, the Bobcats have a much better chance to sneak up on a few teams this year. Now that Tim Albin has a full year under his belt as the man in charge, Ohio should be ready to handle a MAC schedule with him as its coach.

Handling the first month of the season could be another matter. Penn State and Iowa State back-to-back means a rough September is all but guaranteed, and a 2-2 mark at the start of MAC play would be huge for Ohio. Once the Bobcats get there, the key will be learning from last year and turning tight losses into wins. Ohio lost four games by seven points or less last season and struggled to stay healthy over the final month of the season. Still, the Bobcats managed upsets of Miami and Eastern Michigan, which showed they were a better team than 3-9 suggested.

If quarterback Kurtis Rourke can build off last year and become more of a threat with his arm, there’s a great chance for a six-win season this time around. Facing Western Michigan won’t be easy, but they get Northern Illinois at home and have several winnable games in Athens. Ohio should be improved this season.