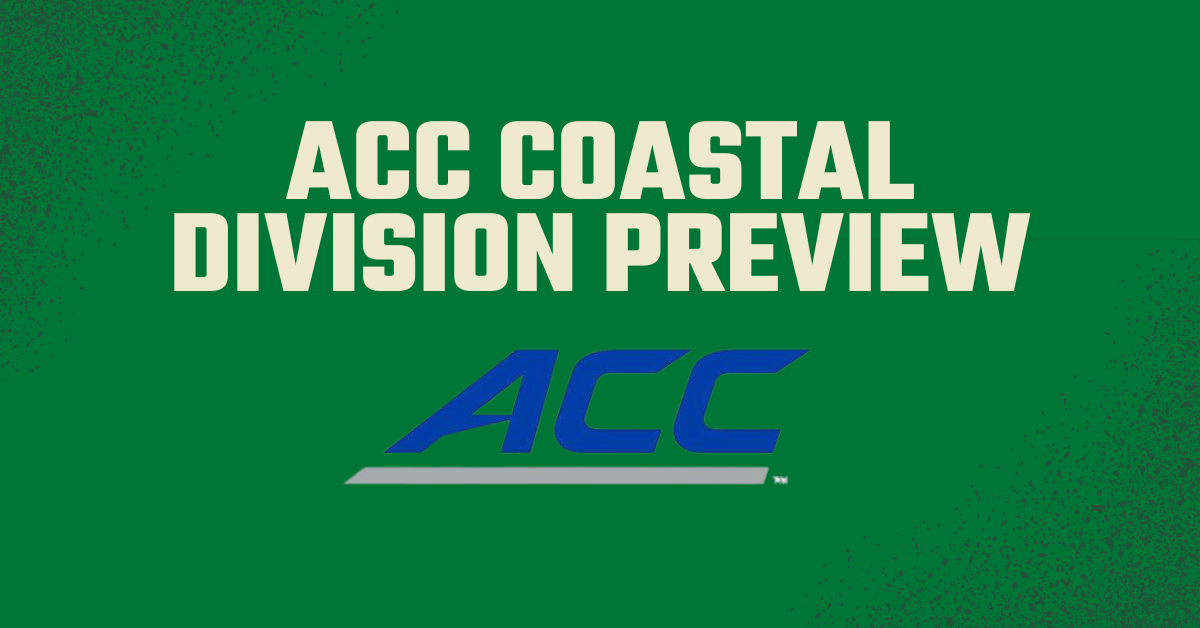 While the Atlantic has been Clemson’s domain for the past several years, the Coastal has meant chaos. This is the division that saw seven different champions over the course of seven years and hasn’t had a repeat winner since Virginia Tech pulled it off in 2010 and 2011. However, chaos hasn’t meant championships. Pittsburgh’s title last year was the first for any of the seven Coastal members since Virginia Tech won in 2010, as Clemson and Florida State had hogged the past 10 ACC titles until 2021.

About the only thing that can probably be said for sure about the Coastal is that Duke almost certainly isn’t going to go from worst to first and make an appearance in the ACC title game. But one of these teams will get to Charlotte, and finding the right one can be huge for your bottom line.

Duke has been the ACC’s version of Maryland over the past few years: the Blue Devils start off strong, pick up a decent win somewhere in the first month of the season and then hit the skids when ACC play begins. Last year was a perfect example, as Duke handled North Carolina A&T, Northwestern and Kansas at home and slipped up against Charlotte, getting three of their expected four wins in September.

But when ACC play began, Duke wasn’t close to competing. The Blue Devils’ average margin of defeat in ACC play was 28 points, and only Georgia Tech and Pittsburgh allowed Duke to stay within 30 points in league play. This might get worse before it gets better, because Duke breaks in a new starter at quarterback in Jordan Moore and running back Jordan Waters. The Blue Devils do have four starters back on the offensive line, but they have four new starters in the secondary, which likely will not help their cause against the likes of pass-happy Wake Forest and North Carolina.

The one saving grace for the Duke defense is that they return all three of their linebackers, but that’s probably not going to be enough to save the Blue Devils from another rough season. Duke hasn’t reached four wins since 2019, and it doesn’t look like that will change this year either. The Blue Devils probably can’t even count on their traditional September strength this time around, because they have to visit both Northwestern and Kansas this year. This looks like a 2-10 season and another 0-8 campaign in the ACC.

The transition from triple option to spread offense continues to be a rocky one in Atlanta, as Georgia Tech crashed down the stretch with six straight losses and didn’t score a point in its final two games of the season (getting outscored 100-0 by Notre Dame and Georgia). They didn’t do themselves any favors with their schedule outside the ACC, as they added both Mississippi and a return game at Central Florida along with their traditional game at Georgia this season.

That said, the Jackets aren’t going to need a lot to go their way to hit this number. Georgia Tech has three very winnable home games in Western Carolina, Duke and Virginia, which means they just have to find one more win in order to hit their number. As long as they can get the defense fixed — or at least playing like it did in the first half of the season, that’s very doable.

The offense should be a lot better this year because Geoff Collins was able to throw Jeff Sims into the offense for the past two seasons and should be able to completely take the training wheels off this year. The offense stalled out when Sims missed the final three games of the season, and with that in the past, Tech should be able to find one more win in there somewhere. Having BC back on the schedule would help a lot, but the trips to Virginia Tech and North Carolina are winnable, making the over a reasonable play.

Given that nobody has repeated as ACC Coastal champion in 12 years and that Pittsburgh has to come to Miami, the Hurricanes make the most sense as the top team in this division. Like Georgia Tech, Miami has an experienced quarterback in place, but Tyler Van Dyke has shown far more than Sims at managing the offense. Plus, Miami returns a decent runner in Jaylan Knighton and has seven starters back on defense, all of which should set the Canes up for success.

The big question for Miami is whether the Hurricanes can close out games. That was what got Manny Diaz fired last year, as the Hurricanes were three plays away from going 8-0 in the ACC and likely playing in the Orange Bowl. The defense was a big problem a year ago, and the addition of coach Mario Cristobal and defensive coordinator Kevin Steele should help Miami keep opposing offenses in check. This is the most talented team in the Coastal, and the lack of an Alabama hangover this year should set Miami up to start no worse than 5-2. As long as the Canes can figure out finishing out the game when they have a lead, they’ll hit their number.

The loss of their top defensive players proved too much for Carolina to overcome a season ago, as the Tar Heels couldn’t get any kind of consistency going and only once won consecutive games in 2021. The result was a 6-6 mess and a bowl loss to South Carolina that wasn’t even that close, and now the Heels have to figure out life after Sam Howell.

The good news is that if they can get good quarterback play from Drake Maye or anyone else who’s under center, they’ll be able to put up a lot of points because of their top two receivers returning from last season. Josh Downs and Antoine Green provide an excellent 1-2 punch at the wideout positions, but it’s going to take some time to get things figured out. And unfortunately for Carolina bettors, time is not something the Heels have. Carolina’s early schedule is brutal, as they’ve got tricky road games at Sun Belt members Appalachian State and Georgia State in consecutive weeks and might very well lose both. They follow that up with Notre Dame, Virginia Tech and Miami before the schedule finally eases up with the short drive to Duke.

With one starter back on the offensive line and a new offensive line coach in Chapel Hill along with the lack of experience under center, I think Carolina will struggle through the first two months of the season before becoming a sneaky bet down the stretch. But eight wins seems like a tough target.

If Kedon Slovis can improve on what he did at USC, this is going to work out nicely. If not, Pitt’s going to fall back to the pack a bit. The Panthers had their first 10-win campaign under Pat Narduzzi and come in as the defending ACC champion, but Kenny Pickett has traded in blue for black as he moves over from the Panthers’ locker room to the Steelers’ at what used to be Heinz Field.

The loss of Jordan Addison means that Jared Wayne has to step up as the Panthers’ top pass catching option and the Panthers need to get more from the ground game. Pitt got two-thirds of its offense via the pass last year, but the Panthers have all five starters back on the offensive line and running back Israel Abanikanda should have plenty of space available to both get plenty of yards and keep opposing offenses on the sidelines.

However, the Panthers have a trip to North Carolina with the Tar Heels off a bye and the season ends at Miami in a game that could be for the Coastal Division title. Ideally, the Panthers will take care of business before getting to Miami in the hopes that Clemson and someone else takes care of the Hurricanes before they ever reach South Florida. Nine wins is a reasonable target for Pitt.

If Virginia is going to hit this target, it’s because the early part of the schedule is incredibly soft. Out of the first five games, the only one that should trouble the Cavaliers should be the trip to improving Illinois, which will likely have revenge on its mind after Virginia hammered the Illini by 28 points last year in Charlottesville. Otherwise, Virginia should be at least 4-1 when the Cavaliers host Louisville for homecoming on Oct. 8.

But after that, it’s hard to see where the other four wins come from. Miami and Pittsburgh will be tough to beat, even at home, and the Cavaliers will likely have their hands full with both Coastal Carolina’s experienced offense and the always-difficult trip to Blacksburg. Even the visit to Georgia Tech is no sure thing, as the Yellow Jackets put up 40 points on the Cavaliers a season ago in a losing effort.

The defense just isn’t good enough to slow down anyone, and the Cavaliers went offensive-minded in hiring Tony Elliott from Clemson as the new man in charge. The good news is that Brennan Armstrong returns at quarterback, but the running game was nonexistent last season, which kept the Cavaliers’ defense on the field for far too long. There’s also an entirely new offensive line, as all five starters are gone from a season ago. This number looks too high; Virginia would likely consider six wins a success this season.

This is probably going to get worse before it gets better in Blacksburg. Virginia Tech didn’t do much of anything on offense last season, averaging a mere 24 points per game for the season. On the surface, that doesn’t seem that bad, but 119 of the Hokies’ 308 points came against Syracuse, Duke and Middle Tennessee. Toss out those three games, and Virginia Tech’s average drops to an anemic 18.9 points per game.

The Hokies have just four starters back from that team and a new coach who comes from Penn State, not exactly a bastion of offensive success. Defense wasn’t the problem for Virginia Tech for most of last year, as the Hokies held six opponents to 17 points or less, but unless Grant Wells can go from Conference USA to the ACC, the defense is going to have to do even better this season.

If Virginia Tech is going to make a bowl, it has to get the job done in September. The Hokies have three of their first four games at home as well as a road test at Old Dominion, which means they could be anywhere from 4-0 to 1-3 when they roll into Chapel Hill on Oct. 1. (If they’re 0-4, this is going to be a long year in Blacksburg). Realistically, September and November are Virginia Tech’s best chances to get wins. This seems like a six-win squad and will need the defense to play out of its mind in order to hit its number.