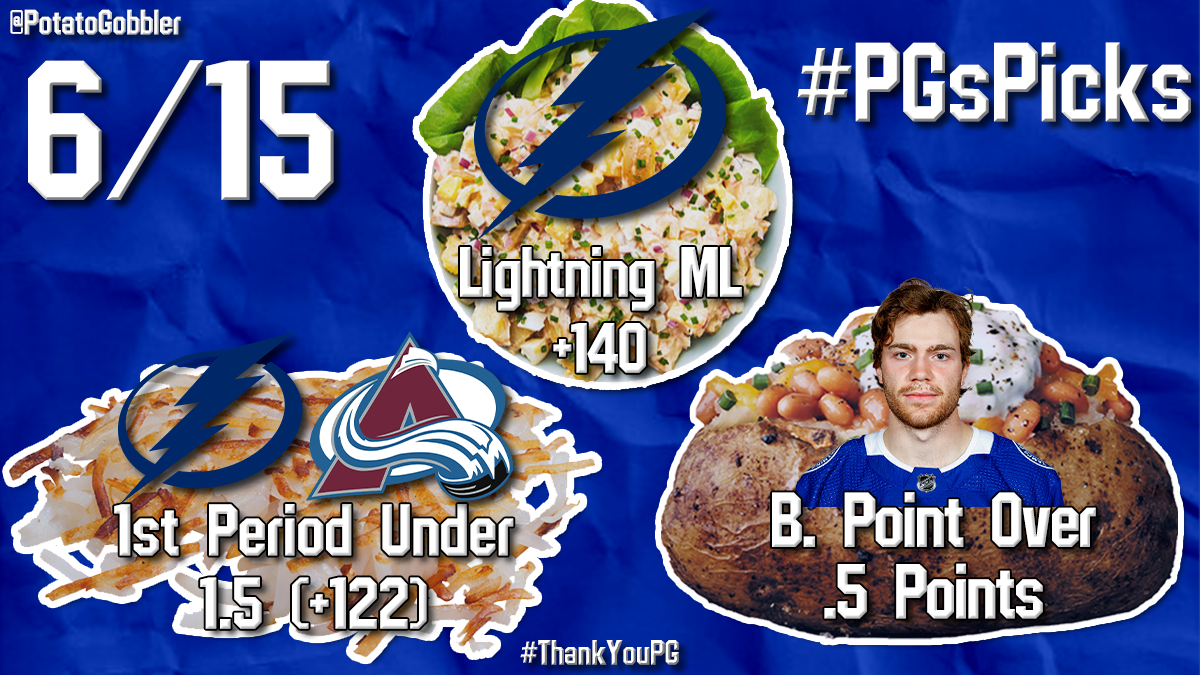 Seems like we’ve been waiting forever for the finals to roll around but here we are. Even though I have my Lighting +1200 future to sit on, I feel like we should have fun and make some plays on the games. While we’re here can we all admit that the NHL playoffs have been upwards of 60 times better than the NBA playoffs? Good.

The 1st period of Game 1 is almost always a ‘feeling out process.’ I expect both goalies to be excellent, at least in the 1st. Andrei Vasilevskiy has been putting together a great playoff run somewhat quietly. Darcy Kuemper is back in the net for the Avs after missing a few games in the last series. Both of these goalies are very nice, but both teams have some very nice defensemen too.

For the Avs they have a world-beater in Cale Makar, a guy who can really do it all. The Lightning are very stout in the back end too with guys like Sergachev and McDonagh. These teams don’t mind blocking shots in front of the net.

I expect at least the 1st period to be a slower pace, it may speed up later on. Getting this at plus money with 2 solid goaltenders is too nice to pass up.

That’s right, Pointer is reported to be ‘good-to-go’ for tonight’s Game 1. Many people have argued Point is the best player on the Lightning. I’m not sure about that, but what I do know is the 28-year-old is very back. This guy is a point machine, especially in the playoffs.

He’s almost guaranteed a good matchup line-wise, as centers Cogliano and Kadri are both out for the Avalanche.

As I pointed out in the last pick the Avs are short a few important bodies, even with those 9 days of rest. I really think 9 days off is going to be a bad thing for the Avs.

I’m rolling with the team that has better goaltending and has faced a harder road to get to this point. I think the 4 days rest the Lightning got favors them a lot more than the 9 days the Avalanche have had.