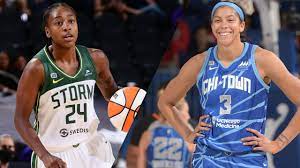 I’ve been ice cold lately in our WNBA plays and at the end of a day a loss is a loss but our analysis has been strong.

If you haven’t subscribed to the Whoopin Bets Show, don’t be afraid to hit that subscribe button.

Dallas got spanked. The Sparks outscored Minnesota 25-16 in the third quarter but ended up losing outright, 87-84 to give the Lynx their first win of the season. We were hoping for a back door cover by Phoenix but after they cut Las Vegas’ lead down to 79-71 with under two minutes to play, the Aces ended the game on a 7-3 run to ruin our Mercury +8 play.

Tough days happen but we don’t want to be known for cold streaks. With one game on today’s slate, our goal is to go 1-0 to get back on track.

Today's challenge: go 1-0. No video today but we are working on a blog for today's play @kotacappers

Breanna Stewart is expected (not official yet) to be back on the court for Seattle after being sidelined for the last couple of games due to health and safety protocols. Epiphanny Prince, who has also been in health and safety protocols has official been cleared. Seattle is riding a 3-game losing streak and Chicago heads west on a 2-game winning streak with wins over Minnesota and New York.

Epiphanny Prince has been cleared from Health and Safety Protocols. We’re still waiting to hear about Breanna Stewart. Seattle’s next game is Wednesday at 7:00PM.

With Stewart (questionable) and Prince being back, this is still not a Storm team that’s at full strength. The two players have also only played two games this year but the question now becomes, how ready will they be?

The Sky are the better team right now and are rolling into town with a good amount of confidence.  Seattle hasn’t put things together yet but that’s because the core squad hasn’t been on the floor together a ton this season. With so many questions with who is and isn’t going to be on the court for Seattle, I’m leaning towards Chicago -3.5 on the road. Life without Stewart has been rough for Seattle but getting Prince back should be huge. Chicago just looks to good not to back here today.

I’m eyeing the total in this game, however. This total has been moving since it’s opened at 161. It dropped down to 158 early Wednesday morning but popped back up to 160 around noon. Chicago has six players that averaging double-digits this season and Dana Evans and Candace Parker lead the way. During their 3-game losing streak, Seattle is allowing just over 83 points per game and I think tonight that Sky offense is going to be rolling on the road.

I’ll take the over here tonight. I’m not saying Seattle will put up 90 points even though having Prince back in the lineup is key for the Storm’s offensive production but I can see Chicago putting up 90-plus points. The offense looks unstoppable right now with how many scoring options they have. I’m hoping for an 86-80 final tonight with the Sky getting the win and cover and the over cashes.