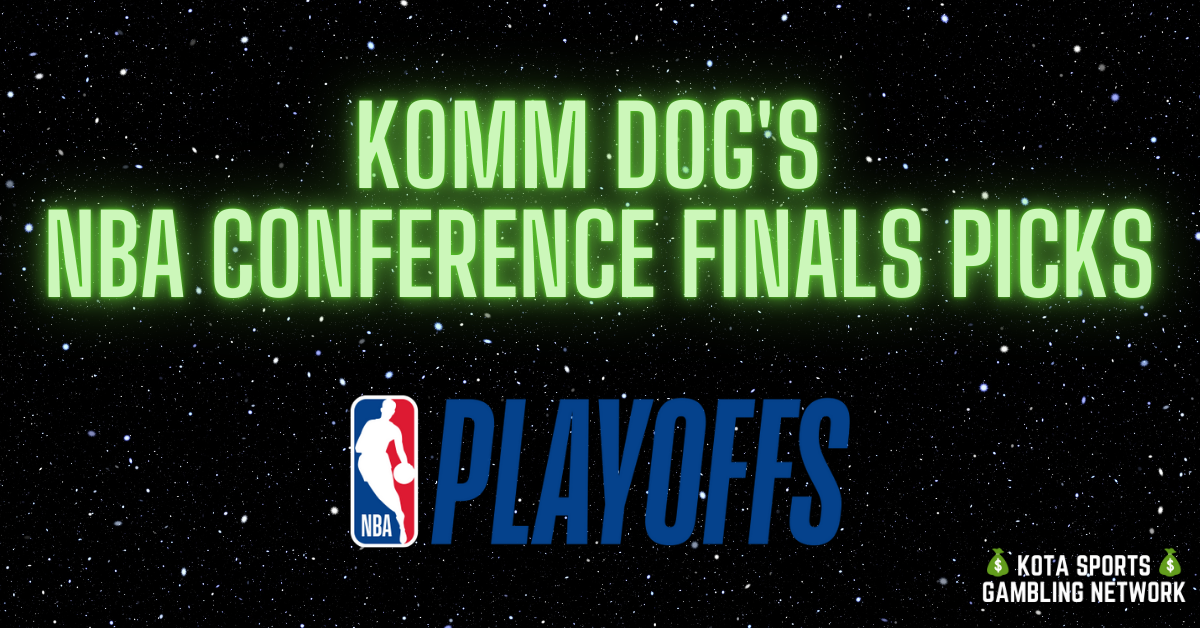 If you’re anything like me, when there are a lot of sports on TV, that is the best time to be watching. We got A LOT going on right now in the sports world. MLB is getting in full swing (play-on words, score one for Kyle’s humor), the WNBA has started up, and we got the playoffs for both the NBA and NHL happening. The NBA playoffs have been bonkers to say the least! We just witnessed two game 7s in the NBA playoffs. Now that the conference finals will be beginning soon and the media coverage will increase, this is the perfect opportunity for people who want to get their skin in the game a little bit to give it a shot. Let’s take a deeper dive into the NBA conference finals games, Note: All odds below are courtesy of Caesar’s Sportsbook.

The classic #1 seed vs. #2 seed conference final. I discussed the Heat with Pace on Gambling Feud’s NBA Playoff Preview Show. This team simply cannot be taken lightly. They have a veteran head coach in Eric Spoelstra, who knows how to win championships. This is a lineup that can have just about any guy go off at any team. Jimmy Butler is finally getting the playoff experience he is looking for and has been lighting it up in the playoffs thus far,  28.7 ppg and 5.4 apg. They also have been getting some much needed production out of Center, Bam Adebayo has hauled in 7.7 rebounds a contest and has rejected just under one shot per game. Off the bench, they have this season’s 6th man of the year Tyler Herro, along with guards Duncan Robinson and Victor Oladipo. This lineup has also been the best defensive team thus far this playoffs, giving up only 97 ppg, only team in NBA to give up only double digit points. This is a solid all-around Miami Heat team that will be looking to show they are the true #1 seed. On the flip side, the Celtics are looking to get their revenge on the Heat from the bubble playoffs a couple of seasons ago. They have been playing with major intensity so far, sweeping the Nets and coming back from a 3-2 deficit to defeat the Bucks. Jayson Tatum has been waiting for this moment for a long time now and he has shown he can be the spark the Celtics need in the playoffs, leading the team with over 28.3 ppg this playoffs. Marcus Smart has been doubted and hated on all season long but has been huge on the defensive end of the basketball for the Celtics, guarding Durant and Giannis this playoffs. Off the bench, it’s hard not to talk about Grant Williams, especially after that Game 7 game that saw him hit a game 7 playoff record 7 3 pointers. They, like the Heat, have a lineup that can have just about anyone go off and are solid both offensively and defensively.

Key for the Heat: Keep the momentum on your side. The Boston Celtics are a momentum team that feeds off of each other’s energy. If they make a few good plays in a row on both ends of the floor, their confidence will increase and they play their best brand of basketball. If they are getting guarded too heavily, to the point where they begin to get on the refs, that’s when the frustration kicks in and the momentum goes against them. If the Heat can start games confidently, guard Tatum extremely tight and not let him get going, and can keep the Celtics fans quiet during the games in Boston, Miami will have no problem winning this series.

Key for the Celtics: Open up the transition game to get quick buckets. The Miami Heat are incredibly solid defensively, and will make it way more difficult for the Celtics to get a bucket in the front court then the Nets and Bucks did. By getting the ball moving and getting quick and easy buckets off of transition, this will tire out the Heat and then slowing down the ball and running the offense will be a lot easier. Celtics are averaging 20 ppg off transition this season compared to the Heat’s 14 ppg. If the Celtics can move the ball in transition early in games, it will be a lot easier for them to win this series.

Overall Thoughts: This game is going to be a low scoring series, and you should expect the O/U in every game of this series to be between 200-210. These two teams are well coached, they have superstars, are juggernauts defensively, and are clutch in crunch time. These games will be close, and I do not expect any blowouts to happen. This is a series I can see going a minimum of 6 games. I am a Celtics fan, so I will be rooting for the Celtics. However, I absolutely respect the Heat and all they have done this series. This will be a series to watch without a doubt.

These two teams may have not been top 2 seeds this playoffs, but there is no denying they have been playing the best basketball in the Western Conference this postseason. With the splash brothers finally back together again and healthy, the Warriors have been playing lights out basketball so far this postseason. After an injury caused him to miss a significant amount of the regular season, Steph Curry started coming off the bench and transitioned to the starting role. He has played phenomenal this postseason averaging nearly 27 points and 6 apg, while also shooting 36% from behind the arc. Klay Thompson also appears to be back to his old self again and has also looked very solid this postseason averaging 20 ppg and shooting 40% from behind the arc. The Warriors have also found themselves a gem of a player in 2nd year guard Jordan Poole, who has been playing tremendously this year and was the starter for Curry when he was out with injury and playing off the bench. Poole has some of the best court vision that I have seen, and he will be an absolute star in the league for years to come. This Warriors squad is looking prime enough again to win the finals. The Dallas Mavericks on the other hand have had the underdog role in their most recent series, where they DISMANTLED the Suns by 33 points in Game 7 to move on. If you have not been following Luka Doncic since he has been in the league, you have simply been missing out because he has been my favorite non-Celtics NBA player to watch this season. This postseason he has been major for the Mavericks success, leading the team in points per game (31.5), rebounds per game (10.5), assists per game (6.6), and steals per game (1.9). Although he has been the biggest reason for the success of the squad this year, they have also had great production from Jalen Brunson, who has complimented Luka well, averaging nearly 23 ppg and 4 apg. Spencer Dinwiddie has also been a big spark for the Mavericks off the bench by scoring a little over 13 ppg. This Warriors team will once again be doubted in this playoff series and will look to prove the haters wrong once again.

Key for the Warriors: Avoid big games from role players. It doesn’t matter who you have guard Luka, he is going to get his points. Brunson likely is the same way, but he can be contained a lot easier than Luka. When the Mavericks are most dangerous is when guys outside of Luka and Brunson get on a heat check. The Warriors did a good job of that against the Nuggets in the opening round, but struggled a little more with that in the second round. If they can shut down the rest of the team and make Doncic and Brunson beat them, they are going to be in a really good position to move on to the NBA finals.

Key for the Mavericks: Don’t allow scoring runs to last long. The Warriors are a team of runs. Once one three pointer is made, you can just about guarantee another three pointer will be made. They feed off of each other’s energy, but the energy usually gets amped up off of scoring runs. The Mavericks had a tough challenge in controlling the Suns when Devin Booker, Chris Paul, or Deandre Ayton were playing well. If they can bring that same intensity to the WCF and respond immediately off a Warriors bucket, they very well could upset the Warriors and go on to play for the NBA championship.

Overall thoughts: This series is the complete opposite of the ECF. This series is going to be an offensive dominated series and overs will happen more than unders. The experienced splash brothers in Steph and Klay vs. the young stars in Luka and Jalen is going to be must see TV. The Warriors have been in this position and their experience could be what gets them the victory this series. However, as I stated earlier, most doubted the Mavericks against the Suns, and the Mavericks have proven them wrong. We will just have to see if the Mavericks can get an upset one more time.