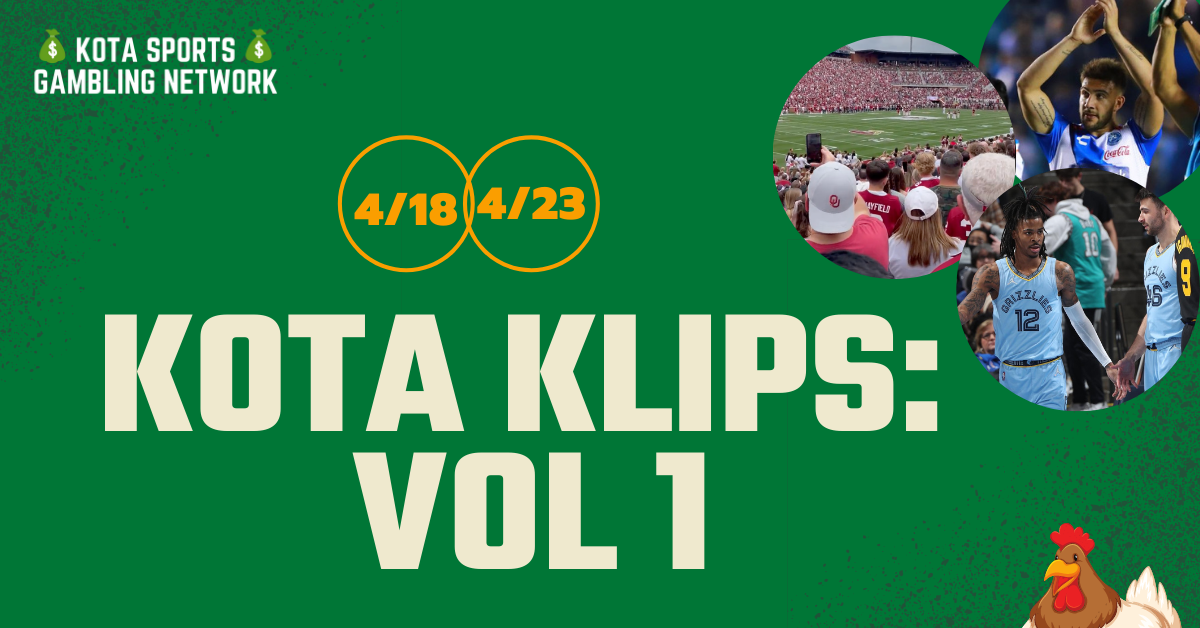 Kota Klips is a weekly blog series that recaps what happened at the network throughout that week. In a perfect world, Kota Klips would be a video series but for now we’ll have to settle with a Sunday blog.

Shoutout to @Tailing_Cappers for the love earlier this week. TC tails five handicappers from #GamblingTwitter everyday and on Wednesday they picked up @kommdog’s Bulls +10 play. It cashed and the following day they tailed @vonfluechoke’s MTL/PHI o6 play and that was an easy cash for the Real Mr. Ice. TC went back to tailing @kommdog on Friday with his Heat -1.5 play and Miami’s largest lead was 16 points but it wasn’t enough as Atlanta came away with the 111-110 win. Jimmy Butler with a wonderful final offensive possession.

Terrible final possession by the Heat.

Everyone knew that was going to Jimmy Butler. Everyone.

And now, the Hawks win, and this is suddenly a 2-1 series. Game 4 Sunday night just got more interesting.

Sorry to anyone that listened with Friday’s episode of Mount Lockmore. The second half of the episode @bruss35 and I basically did play-by-play for the Grizzlies/Wolves Game 3. Minnesota jumped out to the 26-point lead early and I knew it wasn’t over but I was pretty comfortable with that cushion. Boy, did my nightmare come true or what? Bruss had Memphis -1.5. It was his Game of the Year. Looked like the Worst Bet of 2022 through the first three quarters and then Memphis outscored Minnesota 37-12 in the final quarter. But it’s okay because series is now tied 2-2 after Minnesota’s Saturday night win. Congrats to Bruss though. Just an overall wonderful play.

Personally, I’ve had an interesting week. I finished Monday, Wednesday and Friday up +12.29 units (13-3-1) but my Tuesday, Thursday, Saturday stretch was brutal. I lost -6.74 units on Tuesday and then a combined 5.85 units down on Thursday and Saturday. So, let’s just give it right back, eh? But I wasn’t the only one that had an undefeated day this week.

DG Bets hits not one but two big money parlays

All this dude does is win parlays. That’s another 💰 for @DgBets.

✅✅✅💰 GIVE IT TOOOO MEEEEEE!!!!!!! Let's go! @kotacappers it was a most beautiful night. Also smashed the POD as well Vancouver ML. pic.twitter.com/c3PV1IpveQ

As many people know, @djcorf07 loves to call people. I on the other hand do not. I think I have a max of three or four actually non-work phone calls a week. So, I wasn’t able to answer his call on Friday night but if I would’ve I would expect it would’ve been a conversation about Puebla. Now before I defend why I said his locks might be put on the do not bet list, I want to say and it’s not even me saying it because it’s facts but he’s hit the most plus-money Play of the Day’s than any of us at the network. That’s huge. His locks on the other hand are horrible. His two locks were Italy and most recently Puebla. They both lost. When I ask if I Puebla is the play and get back “pew-pew to my melon, Puebla is the play” and it doesn’t win, that’s not a great look. But it’s really on me because nobody ever wins a bet they talk up. That’s my No. 1 ‘How to Fade a Friend’ rule but Mr. LockLoss needs to be his new nickname.

I do have to say, however, lately it hasn’t been just Corey hitting plus-money POD’s. @djlo4422 hit a +459 parlay on Thursday and @danangell11 has won a handful of plus-money POD’s in the past.

I’m the fan that says one quarter the T-Wolves are going to win the Finals to the fourth quarter when I’m TWEETING IN ALL CAPS TO TRADE KAT. Last night’s 119-118 win over Memphis was a great example. KAT came out hot even though his four first-quarter turnovers overshadowed that. The one-point win seemed odd considering Ja Morant was held to 11 points on 4-of-13 shooting but his u28.5 points total was easy money. Minnesota had a 15-point lead at one point in the game and got demolished in the paint (50-30) but KAT played his best game of the series even though it started with mistake after mistake. Bad passes, tunnel vision, dumb fouls, forced shots, you know, just the typical KAT play but he worked out of it and was the main reason Minnesota was able to fight off the Grizzlies comeback. Of course, I want and believe the T-Wolves can win this series but I’m smart enough to realize that Memphis is going to make this a 7-game series because they are really good. Both teams have looked wonderful at times and both teams have looked like day old guac at times. As long as two more chicken protests happen, Minnesota is onto Round 2.