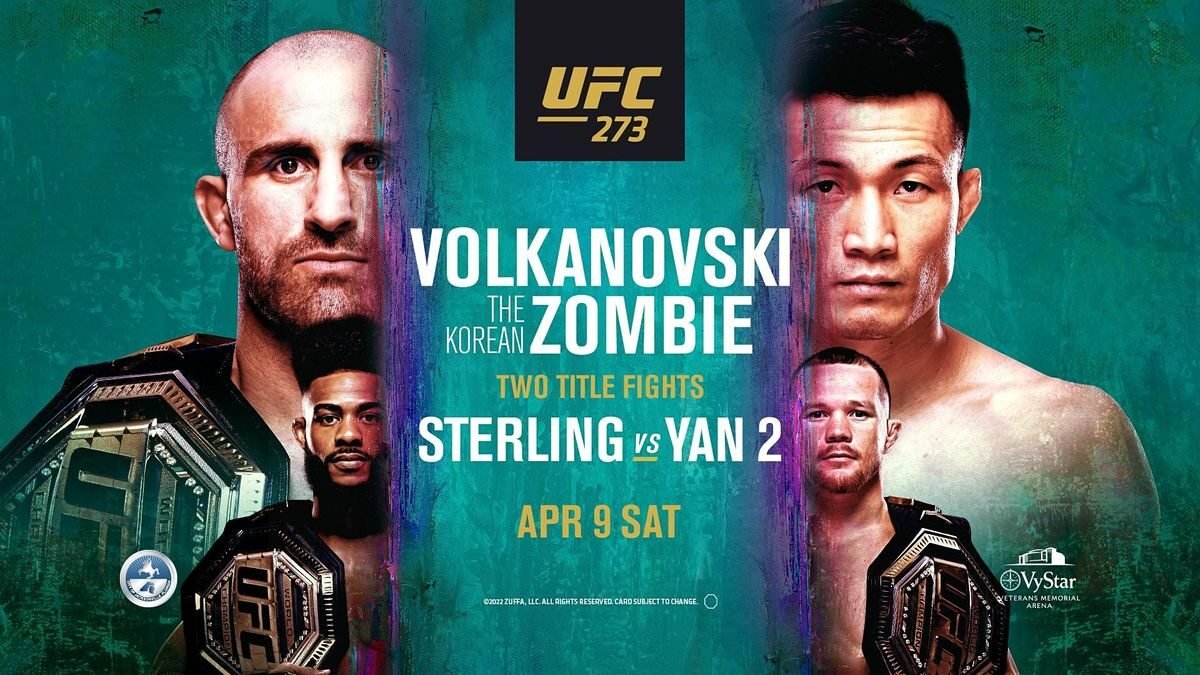 The UFC returns to Jacksonville, Florida this weekend for the first time since UFC 249 in May of 2020. I am hoping UFC 273 can bring the same heat that UFC 249 provided us fans; and, even though the names on the card might not be as big, I believe it will deliver. This was a very tough card to cap based on massive line movement and heavy favorites; however, I believe I have cracked the code and am bringing some winners to you all.

I was fortunate enough to be in attendance for Ian Garry’s UFC debut at UFC 268 at Madison Square Garden. He looked alright, not great, and I thought he might be a potential fade spot coming in to his next fight. However, I think the UFC is setting him up for a win. Garry had some octagon jitters his first go around against Jordan Williams but he has seemed much more confident since and I don’t see that happening again. Jordan Williams is a very tough dude and the only time he had been knocked out previously is by Dwight Grant, even going three rounds with Nassourdine Imavov, which tells me that Ian Garry hits very, very hard. Weeks is a gamer and will be ready to go but I don’t see any part of his game that has an advantage over Garry. My one area of concern with this bet is Garry wanting to show that he can go the distance and fighting a longer fight. With 6 of Garry’s 8 wins coming in the first two rounds and him being -400 on the ML, I will take plus money all day here.

As most of you may know, I have been on the Khamzat train since day one. This guy is an animal and in my eyes the best WW on the planet. I’ll admit I was a little shocked to see Khamzat is going to close at around -550 against Gilbert Burns and I do believe this line is wide, and that is why we have to dig into the props. My first look (which I assume would be everyone’s first look) was Khamzat by submission which currently lays around +300. I think this is a good line but Gilbert Burns is very hard to submit. He has never been submitted in his career and is a BJJ World Champion. If Khamzat hurts him, he might look to take his neck but I like the KO line against a chinny guy like Gilbert Burns much better. Khamzat has 6 of his 10 professional victories by KO and I believe we see another one Saturday night.

This is honestly the fight I am most excited for on this card. Everyone knows what happened in the first matchup between these two and these guys hate each other. I truly think we will see a war between these guys Saturday night. I am a big fan of Petr Yan and I think he is a top three P4P fighter in the world, that being said, this line is too wide. I am not going to pay -500 for Petr Yan when they were a pick ’em last time they fought against a (visually and mentally) much different version Aljamain Sterling. Yan was most likely going to win that fight four rounds to one on two scorecards and three rounds to two on another. If either guy gets a finish here, I see it being very late in the fight but I don’t see either guy with a path to victory by finish here. I love FGTD here and think we are getting a great price.

Fight goes the distance bets are one of the safest in women’s MMA, but that is not the main reason I took this parlay. Although there is a path to victory by finish for these fighters, I do not see any of these fighters getting finished on Saturday. The only time any of these girls have been finished was early in their career or against former champions or top contenders. I see both of these fights being much lower level MMA than the fights they were finished in. In a three round fight, I see these going the distance.

This will 100% be the most popular played parlay (and maybe play in general) of the weekend. I want to stay away and if you are confident in any single underdog it is worth it to bet all of them straight, but I personally can’t stay away from these favorites. I would worry the most about Garry and Yan here but I will enjoy playing this parlay and cheering for the favorites. I also am playing a small parlay for all to win ITD at +1452.