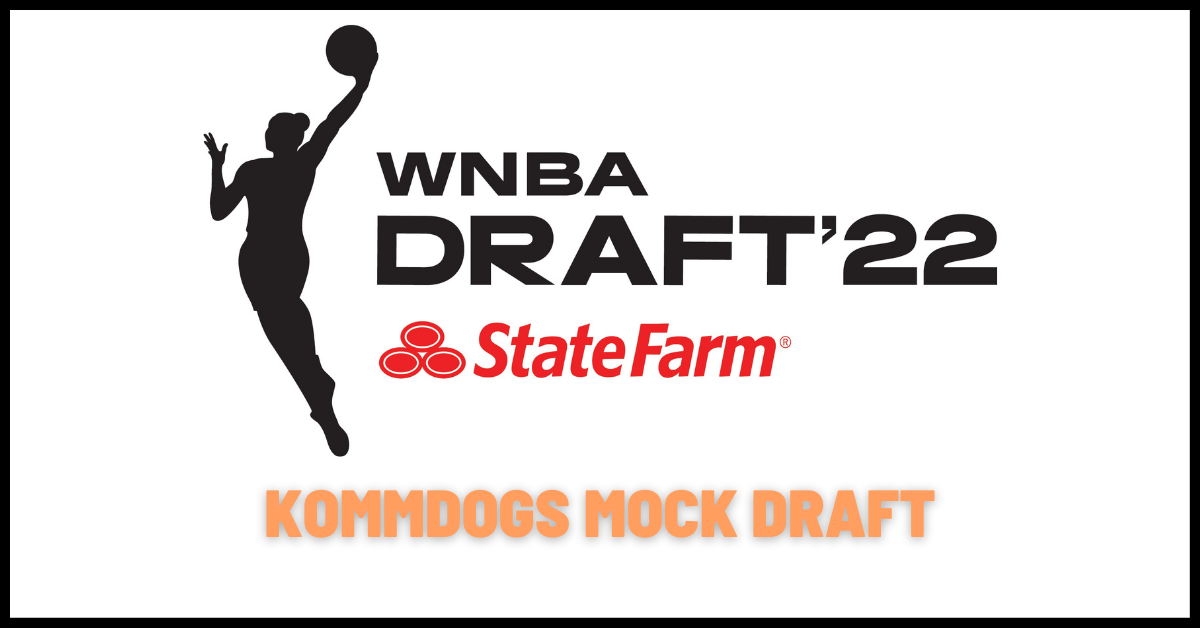 With the Women’s March Madness tournament officially over, we look forward to the WNBA Draft on April 11th at 7:00 CT on ESPN. A lot of trades have occurred with some first round picks, so the draft will feature a number of teams multiple times. Rounds 2 and 3 will be posted later this week, but here is a look at how I think Round 1 will go.

Howard is going to be an absolute star in the WNBA next year. There are so many intangibles in her game that are going to make her dangerous at the next level. She is so good about driving to the lane, taking the ball behind the back to create space with the defender, and nailing a jump shot. She also is very good at finishing through contact and finding the open teammate on the drive. Although Howard’s Wildcats were upset in the First round of March Madness to Princeton, Howard did help lead the Tigers to an SEC championship, while also being named SEC Player of the year for the second straight season. With Delle Donne returning for the Mystics, adding Howard as a one-two punch will make the mystics an absolute fun team to watch next year.

The Fever had a great number of issues this past season, but the biggest one being their Forward play. Struggling to find star power and a true star to keep them afloat, the Fever found themselves at the bottom of the league with a 6-26 record. Nalyssa Smith from Baylor is an excellent start to getting them the star power she needed. The Big 12 player of the year the past two seasons and Wooden Award finalist had a phenomenal season thus far, 22.1 ppg, 11.1 rpg, and 1.1 bpg. Her timing with blocking shots defensively is as good as you can get, and she is not only a dominant presence down in the post but also a dangerous shooter outside the paint as well. Smith absolutely has the talent to turn around the future for the Fever.

Some of these lower teams in the WNBA had some very clear flaws that caused them to be at the bottom of the league. In a league where the post game is starting to matter more and more, the Dream did not have a true, solidified Center to help out their really solid guard play. Austin has solidified herself as one of the best centers in the country this season. The 6’5 center has used her size to her advantage, particularly on the glass this season, gaining rebounds over nearly every defender trying to box her out. She uses her pivot foot in the post well and has a counter spin move in the post that many in the country have stopped this season. To compete in the WNBA next year, the Dream need a solid Center like Austin to do so.

With Indiana taking a very solid forward with Smith thus far, adding a guard to the rotation would be extremely helpful for depth. Kierstan Bell from Florida Gulf Coast is an absolute steal if she can drop out of the top 5. A transfer from Ohio State, Bell actually declared for the WNBA draft this year as a Junior. She has been absolutely DOMINANT in the ASUN and has shown her talents against Power 5 programs as well. The stats truly say it all for Bell, averaging 22.8 ppg, 7.1 rpg, 2.5 apg, and is shooting a whopping 47.2% from beyond the arc. Although injuries have been a problem for her, and some have thought that her leaving a year early might be foolish, Bell is absolutely worth the gamble if she falls out of the top 5.

The New York Liberty were on top of the world for a while. They have an up and running star in Sabrina Ionescu, and are looking to find a way to get themselves a WNBA championship. Adding a forward like Naz Hillmon could very well give them a shot at winning a WNBA championship. She has the potential to be an all-star in this league. Her footwork down low in the post is some of the best footwork that has been seen by anyone in a very long time. She finishes through contact very well. She reads defenders down low and has a move for every type of position the defender is in. It is likely she will drop below Smith and Austin as she is just a true post, whereas the other two are one dimensional and can shoot from the wing and drive. Nonetheless, if utilized right and works well with the stars like Ionescu, Hilmon will have a stellar WNBA career.

Per ESPN’s Mechelle Voepell, Fever GM, Lin Dunn, made it very clear that she wants this team to turn around defensively and lock in more defensively. After drafting two solid offensive players with Smith and Bell, Engstler will be the perfect fit as a defensive minded forward. Engstler has been considered by many in the WCBB world to be one of the best defensive players in the country. Her stats do not show her true worth, but hauled in over 9 rebounds a game and is tough and gritty as they come. Many who have not seen her play might think that this is a reach, but rest assured, she is the best defensive player in this draft in my opinion and will make a major impact on the Fever right away.

This pick makes sense for a number of different reasons. First off, the guard play for the Wings has been phenomenal with Ogunbowale. If she can get a post player to take some of the weight off her, and keep the defense having to respect someone outside of her, they will be dangerous. Second, Nyara’s older sister, Satou, is a starter for the wings. That sister combo could turn some heads in the WNBA.  Sabully is a big time post player whose strength has had other defenders flying down low. She has incredible quickness on the drive and has shown no issues driving to the rim and finishing through contact. The biggest question mark with Salbally is her knee issues, as she has torn 2 ACLs in her basketball career. If she can get over the injury bug and stay healthy, she is going to be a massive piece to the Wing’s success for a long time.

With current center, 2x WNBA champion, and 7x All star, Sylvia Fowles, signing a one-year contract this upcoming season and said it will be her final one, the Lynx will be looking for her successor. Another big name center that should and will be taken off the board very quickly is Elissa Cunane from NC State. Cunane, a three year starter at NC State, has made a massive. She does it all as a post player, but can also be utilized as a stretch five. She has a sky hook that is tough to defend given her height, and can also lead defenders astray by going reverse glass on the baseline. Defenders have also lagged back on her, and she has made them pay by knocking down the three. Having Fowles as a guide and mentor for Cunane could be massive for development and growth into the WNBA and will make for a smooth transition.

To say that the LA Sparks struggled to score last season would be an understatement. They were the worst team in the WNBA and only scored around 73 ppg, but losing guard Nneka Ogwumike certainly didn’t help. They need a person who can catch and shoot and can score often. Rae Burrell is someone who can give the Sparks the spark that they need offensively. She is 34% from three, but the stats are skewed due to the fact that she has struggled this season from three following an injury. When she is healthy, she can score the ball with ease. She will do one-dribble jump shots often, and is very deadly with a screen and pop offense. Injury problems have plagued her, but if she can stay healthy, her potential is through the roof.

With their fourth and final selection of the first round, the Fever should look into rounding out their lineup with a very talented point guard in Nia Clouden from Michigan State. Clouden had a standout Senior campaign this year 20.0 ppg, 4.2 apg, and shooting just below 40% from 3 (39.6%). This season has gotten the notice of the media, as Clouden was a unanimous first team all Big 10 this season. Clouden is unbelievably quick at getting to the basket, and has left some defenders even wondering where she is on offense if she cuts off the ball. She would work really well with Kelsey Mitchell and also would make for a solid backup for Mitchell when she was in need of a breather on offense. If she could gain some aggressiveness to go along with her speed, Clouden could make her way into a starting role as early as this upcoming season.

If the Aces can keep their core together for a long time, they are going to go very far in the WNBA playoffs every single year. They are just missing one piece that is going to get them to a consistent champion team. Aja Wilson is one of the best players in the WNBA, but needs another player on the team to get some pressure off of her. Kone is a player that many will recognize, as she has made her mark overseas on the Mali basketball team. She has shot an impressive 57% from the field in international play, and has been solid on the offensive ends with her speed on the drive and the defensive end with steals. She relies way too much on the drive, and only attempted 3 three point shots during the last FIBA appearance, which could make things difficult for her in the WNBA. If she can develop her jump shot and confidence, her and Wilson will make a great combination in the league for a while.

To round out the first round, the Sun should look to continue to improve their team defensively, as they were the best defensive team in the WNBA, allowing under 70 ppg. They will absolutely be a championship contender if they continue defensively like they have. Adding Burton to the mix would not only bring in last season’s Big 10 Defensive Player of the Year but also a dynamic scorer and playmaker. Last season, Burton averaged 17.8 ppg and 6.4 apg (7th in the NCAA). She also got her defensive player of the year tab by averaging 4 steals per game, which is tied for the best in the entire NCAA. She has really solid court vision, can score from all spots on the floor, and will exhaust any player defensively. The Sun would gain a lot adding Burton to the lineup.

There is a lot of talent in this draft class, and the draft classes in the near future are going to be just as if not even more talented than this one. The future is very bright for the WNBA, so look to get on the bandwagon, support a team, and cheer on some talented women’s basketball players!