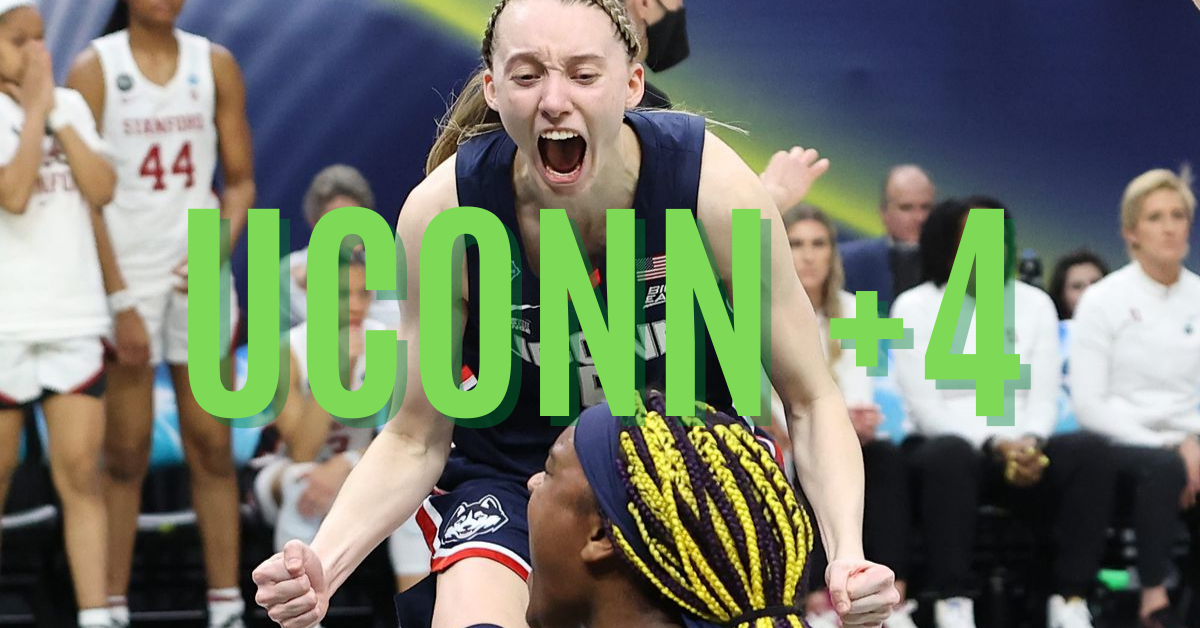 A National Champion will be crowned this evening with South Carolina and UConn set for the final showdown of the 2021-22 season. South Carolina is a 4-point favorite and UConn is +155 on the money line with the total set at 126.

These two teams played earlier this season and the Gamecocks came away with the 73-57 win at the Bad Boy Mowers Women’s Battle 4 Atlantis, however, that was back in November.

Aliyah Boston dominated UConn in that Nov. 22 matchup with 22 points and 15 rebounds in the #1/#2 matchup. Boston is going to be an issue for the Huskies again this evening. Both these teams have taken much different paths to get to the final game in Minneapolis. The Gamecocks got tripped up against Missouri in the regular season and had their second loss come when Kentucky came out ahead in the SEC Championship game.

UConn on the other hand has had a variety of different starting lineups this season due to the injury bug but now they’ve been rockin and rollin ever since Paige Bueckers came back from her injury. The Huskies are without Dorka Juhász … because you guessed it, she had wrist surgery on Wednesday. Thoughts and prayers. But they looked solid without her in the 63-58 win over Stanford in the Final Four.

The Huskies were outscored 17-2 in second chance points back in November against South Carolina. I don’t think that happens tonight at Target Center. Duke proved many wrong and put an end to the “college basketball is rigged” bros and I won’t bring up how Bueckers is going to do whatever she has to do to win a natty title in her hometown. But she’s also prepared and able to do that.

South Carolina is shooting the ball really well lately and it’s like they almost flipped a switch near the Sweet 16. The Gamecocks shot 47.4 percent from the floor last time out and over 35 percent from deep. I do think that the Gamecocks have the better guards in this matchup with Zia Cooke, Destanni Henderson and Brea Beal. Henderson, however, needs to shake off a bad shooting performance (4-for-12) against Louisville.

But UConn has some dogs down low in Aaliyah Edwards and Olivia Nelson-Ododa that can make it hell in or around the paint for you. More specifically, for the Gamecocks. And don’t sleep on the Huskies defense. Both these teams are 1-2 in Her Hoop Stats Defensive Rating.

Her Hoops Stats agrees with the books and says South Carolina should beat UConn by at least six points on a neutral site and by at least 11 points inside Colonial Life Arena (Columbia, SC).

The Pick: UConn +4
South Carolina has the better team in my opinion and no matter how from the heart this is going to sound, I think UConn +4 and maybe even a money line drizzle is the play tonight. It’s not going to be easy me. Call me old school or call me a loser but defense wins championships. South Carolina’s offense is peaking at the right time. UConn’s defense has come alive (they held one of the better 3-point shooting teams in the nation to 17 percent) and I’ll gladly scoop up the four points because I ride with the defense. Geno Auriemma can use the revenge pre-game speech if he wants but this UConn team can keep it close. Edwards won’t shy away from the physical play down low, UConn’s defense can knock South Carolina’s strong guards off their game. Offensively, somebody has to step up outside Bueckers and Azzi Fudd but that’s where Evina Westbrook and Christyn Williams come into play. They didn’t shoot great against Stanford (6-of-22) but tonight they’ll have opportunities with South Carolina most likely going with the game plan of trying to shut down Beuckers. I’m sure the Huskies already know they have to take care of the ball better but that’s an absolute must. If they have more than 10 this game, they lose. But I smell and I expect a UConn cover and I’m confident they’ll have a shot a winning outright, so I’ll put one unit on +155 as well. Bueckers in front of her home city, I promise this isn’t from my heart but it’s from a place where I can feel I have a winning bet. UConn … UConn … u … c … o … n … n.
UConn 62 (+4), South Carolina 58
@kotacapperpace