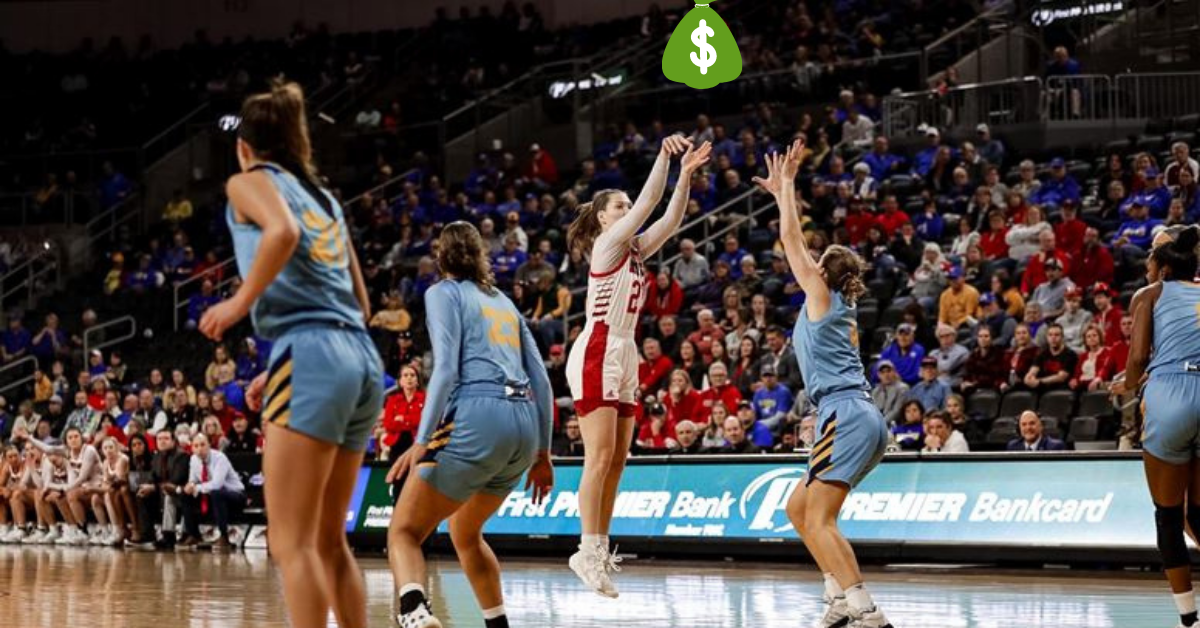 Correction: The South Dakota/Michigan game is scheduled for Saturday, March 26.

If it’s football, ain’t no way I’m rooting for USD if NDSU gets bounced out of the postseason. I rarely have to worry about that because as you FCS fans know, the Bison have won nine out of 11 championships.

But let’s keep this blog about women’s basketball.

The No. 10-seed Coyotes knocked off No. 2-seed Baylor on Sunday to advance to the programs first-ever Sweet 16 appearance with their 61-47 win. Baylor looked like they were hit with a Stupefy spell right out of the gate. Super seniors Hannah Sjerven and Chloe Lamb helped USD jump out to an 11-0 advantage through the first three minutes of the game.

Baylor – who finished No. 7 in the final AP Poll – fell behind 16-4 after the first-quarter and that was the difference. The Coyotes were 12-point underdogs and +525 on the money line.

Head coach Dawn Plitzuweit was so jacked up after the win she hit the griddy. It wasn’t as good as our Kota Cappers griddy video but it was still pretty good. You have to get more loose with it, coach! She isn’t no Amy Williams (my crush) but she’s got the moves and most likely a big payday coming in the near future.

Now the Coyotes face No. 3-seed Michigan at 5:30 pm (CT) on Saturday. It couldn’t be a larger stage for USD as its game against Michigan is the final game of the day. Seven teams will have already punched their tickets to the Elite 8 before the Summit League and Big Ten teams clash. Man, I’d love to be a fly on the wall for Plitzuweit’s pregame speech.

Her Hoops State has Michigan by three points on a neutral court. The game is being played at INTRUST Bank Arena in Wichita, KS. If my elite Internet search skills are as decent as I think they are, I don’t believe either USD or Michigan has played in INTRUST this season.

The Yotes have yet to trail in this tournament. Sjerven gave USD the game winning bucket against No. 7-seed Ole Miss in the opening round and then did it again against Baylor. It’s actually even more wild when you see Mechelle Voepel’s latest WNBA Mock Draft. She has NaLyssa Smith and Queen Egbo from Baylor going No. 1 and No. 8, while she has Shakira Austin from Ole Miss going to Atlanta at the No. 3 spot. That’s three players that are projected to get selected in the Top 8 of this year’s WNBA Draft that the team from Vermillion, S.D., knocked out of the tournament.

Michigan has no players predicted to get drafted in the Top 10 of the upcoming WNBA Draft but they have some dogs on its roster that USD has to be ready for starting with Naz Hillmon. The 6-foot-2 senior averages 21.3 points per game, 9.6 rebounds and shoots just under 58 percent from the floor. Hillmon’s scored 51 points in two tournament games and has recorded two double-doubles. The Cleveland, Ohio native also has only turned the ball over six times in those games.

The Wolverines have six student-athletes that score 5.7 points per game or higher. But what’s important to note about Michigan is Leigha Brown looks to be healthy. She missed a month earlier this year with a leg injury and Michigan’s win over Villanova on Sunday was only Brown’s fourth game back since missing time.

Hell yes, I want the Coyotes to win but I said on the latest episode of Mount Lockmore that Michigan has too much talent for USD. However, don’t be surprised if the Yotes win this game. Michigan loves to score, USD loves to defend. Plitzuweit’s squad is holding opponents to an eighth best 53.7 points per game this season. USD held the 2022 WNBA No. 1 overall draft pick to 4-of-11 shooting and 12 points below her season average, which happened to tie her season low. They also held Austin (6-foot-5) to nine points on 3-of-16 shooting.

My pick: As much as I’d like to take USD ML, I think Michigan advances to the Elite 8. I do, however, like under 123.5. Every possession is going to matter and defensive stops will be made. USD slowed down South Dakota State’s top-tier offense in the Summit League title game and I think they can have a similar game defensively against Michigan to keep this total under. I just think the Wolverines make more buckets down the stretch including free throws to come away with the 65-55 win.