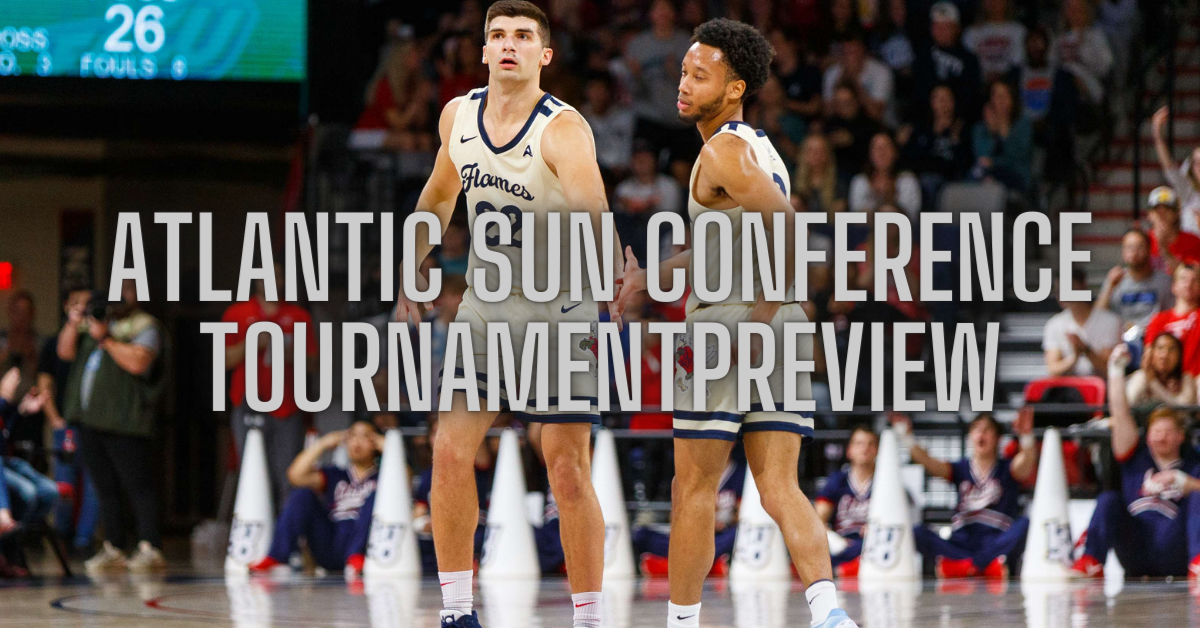 Overview: On paper, you would look at the Dolphins’ stats this season and would never guess that they are good enough to be the top side in the East. They are the worst team in the conference in scoring (66.9 ppg) and their over-under speaks for itself as well. They only have one guy averaging double digits in points in Kevion Nolan. He has been the go-to for the Dolphins this season, averaging 14.5 ppg, 4.0 apg, and shooting 38.5% from 3. Although Jacksonville has struggled mightily offensively this season, they are phenomenal defensively, only allowing 59.8 ppg. That is not only the best in the conference but also is 9th in the entire NCAA. Defense is winning games for them and could even win them a conference championship and an automatic bid to the big dance.

Overview: The Flames have been making serious statements in the ASUN this season. Of their eleven conference wins, seven have come by double digits. There is no doubt that their biggest win this season came against Jacksonville at home when the Flames defeated the Dolphins by a whopping 39 points. The Flames have a contender in conference player of the year on their team with guard Darius McGhee. The senior is leading his team and the conference with 23.3 ppg. He also is hauling down 4.4 rpg, 3.7 apg, and is shooting 40.3% from 3. He has absolutely been the center of this offense, and no team has been able to contain him this season. The Flames will enjoy a round off to rest up, and they sneakingly might end up making the championship of the ASUN conference as well.

Overview: Even casual college basketball fans will remember the “Lob City” Eagles team in the March Madness tournament in 2013 that made it to the Sweet 16. Florida Gulf Coast has another solid squad this season but has had a few struggling games this season that is going to put them at the three seed. Senior guard Tavion Dunn-Martin has put together a very respectable senior season, averaging 20.9 ppg and 6.2 apg (leads conference and 6th in the NCAA). As a team, the Eagles haven’t had issues scoring the basketball along with Dunn-Martin, as they are scoring 77.7 ppg, second in the conference. The Eagles have a tough season finale game against Jacksonville. A win for the Eagles could give them positive momentum going into the tournament.

Overview: Getting a win against Florida Gulf Coast by 24 and Jacksonville by 8, the Owls have shown they can compete against any team in the conference. Some teams that have a worse record than them have given them the business this season with three of their conference losses coming against teams ranked worse than them. A returning starter from last season, sophomore guard Chris Youngblood has been the leader of Kennesaw State this season, averaging 13.7 ppg, 5.5 rpg, and shooting 39.1% from 3. We will find out which Kennesaw State team shows up come conference tournament time. If it is the team that beats the best in the conference, they are going to go a long way in the tournament. If it is the team that loses to the worst, a talented team might get bounced in the first round.

Overview: While Ospreys did not start out very well in the conference this season, they have been playing very well to end the season, winning six of their last 9 games. Of their last three losses, two of them came by only three points. Injuries have plagued North Florida, as their top two leading scorers have not played since February 9th. They have still found ways to win without these guys as well. It sounds like the Osprey’s will get fortunate enough to have back both injured scorers in Jose Placer (14.9 ppg, 2.9 apg) and Carter Hendrickson (12.6 ppg, 5.1 rpg) for the home finale against Florida Gulf Coast. With the squad rolling right now and their two leading scorers returning, we will see if the Ospreys can play their best basketball come tournament time.

Overview: Stetson can hang their head with their win over Jacksonville State this season. Other than that, the Hatters have not had the season they would have liked. They narrowly beat Lamar by one point, and Lamar is arguably one of the worst CBB teams in the NCAA. It does hurt the Hatters majorly however that junior guard Rob Perry has been out half the season with an undisclosed injury, as Perry was averaging 15.9 ppg and shooting 35.4% from the field. However, sophomore guard Chase Johnston has stepped in to fill his shoes by averaging 15.0 ppg and 1.4 spg. Although it appears likely that the Hatters will lose in the first round of the conference tournament, when Perry returns again with Johnston, watch out next year!

Overview: The Gamecocks have arguably been the best team in the ASUN this season. All three of their losses came to teams that are below .500 and ranked lower in the conference. This might alarm some people, but that also means that they are beating the really good teams in the conference. This has been the case as they have beaten Jacksonville and Liberty and have swept Bellarmine. The Gamecocks are led by senior guard Darian Adams, averaging 15.9 ppg, 5.3 rpg, and shooting 39.5% from three. Because they have beaten every single good team in the conference this season and how solid and consistent they have been all season long, Jacksonville State is my pick to represent the ASUN come March.

Overview: It is quite remarkable that a team that only averages 68 ppg while allowing 71 ppg is 17-12 overall, but Bellarmine has found a way. With a win over Jacksonville, Bellarmine has beaten one of the best in the conference. However, they have been swept by Jacksonville State and lost to Liberty and Kennesaw State to round out their four losses. A positive thing for the Knights this season is that they have an incredibly talented senior-led backcourt with Dylan Penn (16.5 ppg, 4.9 apg) and CJ Flemming (15.3 ppg, 38.2% 3 point). This backcourt has found ways to take over games and give the Knights the success that they have shown this season. Beating really good teams is the hurdle that the Knights have suffered all season long but will need to do if they want to win the conference tournament.

Overview: The Bears could not have started the season much worse than what they did. They lost ten of their first twelve games this season, with seven of those losses coming by 20 points or more. This set them back from the get go, and although they have bounced back somewhat this season, the rough patch to start the season will hurt them moving forward. This season, Central Arkansas has given up 83.8 ppg, which is the second worst in the entire NCAA. However, the Bears are a very balanced team offensively with three of their starters averaging double digits in points with guard Cameron Hunter leading the way 14.5 ppg. To make up for lost games, the Bears are going to look to have a solid showing in the conference tournament and that starts with a first round matchup against the likely 6 seed Stetson.

Overview: Finishing off close games has been the Achilles heel for Bisons, as eight of their ten losses this season have come by single digits. They also are struggling tremendously defensively by giving up 78.7 ppg, which only 14 teams in the entire NCAA are worse than the Bisons in this category. Offensively, Lipscomb only has one scorer averaging over double digits with freshmen forward Jacob Ognacevic. The first year is averaging 12.2 ppg and 4.4 rpg. The future is absolutely bright for this youngster, and expect him to make a name in the near future should he stay with Lipscomb all four years. If the Bisons are going to want to have a successful run come in the tournament, they have to tighten up defensively.

Overview: Eastern Kentucky is a team that flat out does not make sense. They are averaging 75.6 ppg, second best in the conference, however they have only won four games in the conference this season. They give up 72.2 ppg, but they are 9-16 at covering the over this season. The Colonels unfortunately are just an odd team that is hard to understand. They do have a really solid sophomore guard in Michael Moreno who is going to make a serious impact for the Colonels over the next couple of seasons. He can do it all averaging 12.0 ppg, 5.5 rpg, and is shooting 35.8% from 3. The East is very talented, and unfortunately, it just doesn’t appear that Eastern Kentucky has the squad that it takes to get past the first round of the tournament.

Overview: Of their 9 wins this season. Kennesaw State is the most well-known, respected, and best record-wise. The Lions just flat out have not been great this season. However, there is some good news if you are a North Alabama fan. This team is young, and when I say young, I mean young. Of the ten guys that the lions play consistently, only one will be graduating after this season. Seven of those ten guys are also a freshman or a sophomore this season. Although this season has been far from great for the Lions, if the entire team sticks around, they are going to be dangerous in a couple of years after having experience playing games for a couple of years. As for this season, it would have to take a miracle to get North Alabama past the first round.

The different style of conference tournament that the ASUN produces is very intriguing, as the first round matchups will be against teams that only played once against each other this season. This conference is very top heavy with any of the top teams having the potential to win and the lower end teams not having a very good shot. This conference has had some surprising games before, so we’ll see who the next one will be to come out of the ASUN.