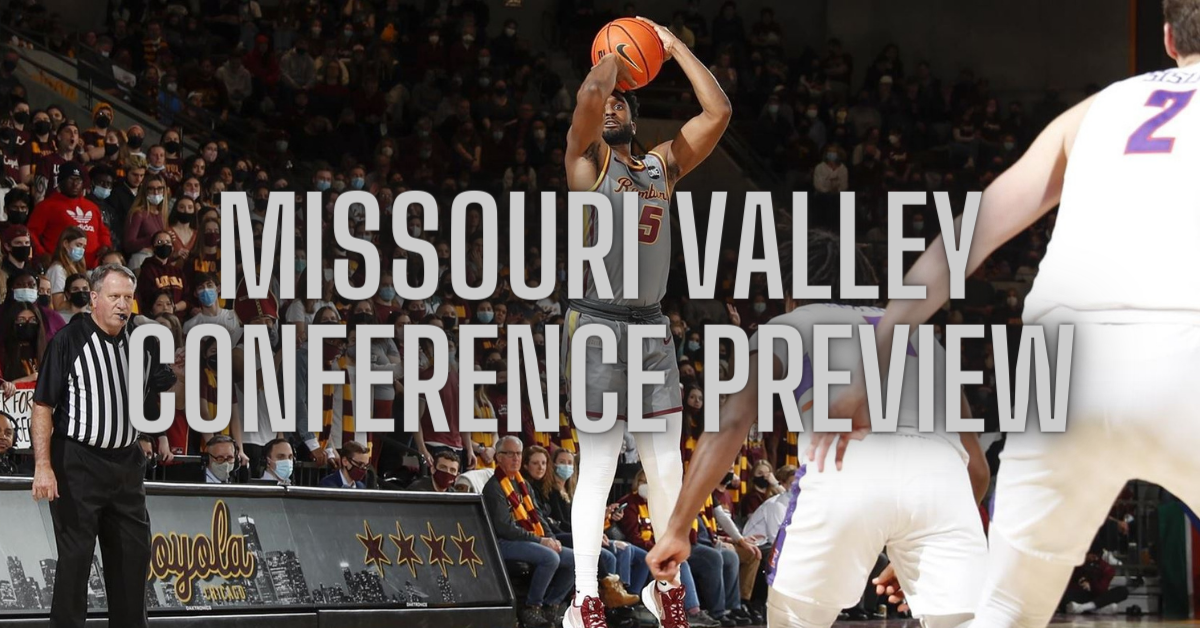 If you are looking for Cinderella teams for March Madness, the Missouri Valley has been the host to several. Many have not forgotten the unbelievable run to the final four Loyola Chicago did back in 2018. Northern Iowa has also been the host of taking down several teams as well come March time as an underdog. This is a competitive conference that is going to come down to the last game to determine seeding. Here are my predictions for the final seeding of the conference tournament and analysis of each team. Note: All standings and trends are as of 2/24.

Overview: No surprises to see the Ramblers sitting up at the top once again. Since 2018, Loyola-Chicago has either finished first or second in the conference regular season, and it does not appear that this trend is going to be stopping any time soon. Other than a 10 point loss to Missouri State, all of the Ramblers losses have been by single digits. Guard Lucas Williamson was a part of the Ramblers’ historic Final Four run and his leadership has shown so far this season. He leads his team in points (13.7), rebounds (4.8), and steals (1.3). Although the Missouri Valley is way more competitive than it has been in years past, it will be very tough to take down this veteran led squad in the conference tournament.

Overview: Growing up in Iowa and having several family members, including the co-host of the Gambling Feud Podcast at the network with myself, DJ Loutsch, graduated from Northern Iowa, the Panthers have always been near and dear to my heart. With that being said, I know how easily this Panthers team can be exposed against teams that they should beat very handily. However, I also know that the Panthers can beat really good teams, and this has been proven historically. Sophomore forward Noah Carter has been big for the Panthers this season, averaging 14.3 ppg and 3.1 rpg. How far the Panthers will go will truly depend on which Panthers team shows up. Will it be the really good team that passes the ball around and gets the offense moving or will it be the offense that lets a certain unnamed player shoot the ball more than his teammates combined.

Overview: If there is any team that can knock off Loyola-Chicago, it is the Bears of Missouri State. Although they got swept by Northern Iowa this season, I do think that the Bears are a better team already talent wise and have the best chance of winning the conference against Loyola-Chicago. Offensively, they are the best in the conference in points per game (77.2) and tied for the lead in 3 point percentage (38.1%). They have a really solid one-two punch on offense with guard Isaiah Mosley (19.5 ppg, 42.1% 3 point – 133 attempts) and forward Gaige Prim (15.9 ppg, 7.8 rpg). With only two bad conference losses to Illinois State and Indiana State, the Bears have proven to be a force to be reckoned with in the conference, despite being the three seed. They are my prediction to come out on top of the Missouri Valley conference and represent the conference at the big dance.

Overview: The first thing I think about when I look at the Bulldogs is how things have changed for them betting wise. Last year, they were the team to bet, but this year they are really bad ATS. In regards to this team, the Bulldogs are an incredibly gritty team who make teams work every single minute of the game. If the Bulldogs lose, the other team is absolutely gassed after the game with how hard the Bulldogs made them work. It shows statistically too, as Drake leads the conference in steals per game with 7.17. The Bulldogs have a lot of potential not only for this year but also for several years to come as they are led by freshman and 2021 Iowa Gatorade Player of the Year Tucker DeVries. DeVries has had a very impressive freshman campaign with 14.1 ppg and 4.7 rpg. If Drake can turn their defensive intensity into offensive points, they are going to be a difficult team to come up against in the tournament.

Overview: The Braves have proven this year they can compete with just about anyone in the conference. They have split the conference series with Loyola-Chicago, Northern Iowa, and Drake. A big reason that the Braves have been in nearly every game this season is their ability to rebound the basketball, leading the conference with 39 rebounds a game. They are also very balanced on offense with three of their starters averaging double digits in points with their leading being guard Terry Roberts. If Bradley is on the winning end of a scoreboard, Roberts will likely have had the most to do with it, as he is leading the team in points (14.8), assists (4.1), and steals (1.5). This team is a dark horse come tournament time and have proven they can beat the best this season. It’s only a matter of time until we see what type of team that Bradley is at tournament time.

Overview: It’s always been said that sometimes when it comes to the conference tournament, the teams that are hot can win more than the teams that are better. Southern Illinois is a team that has been hot as of late, winning five of their last six games and are on a four game win streak. It has appeared that all season long, the Salukis have been a one-man show in junior forward Marcus Domask. This season, Domask has led the team in all major stat categories outside of steals. He is averaging 14.8 ppg, 5.1 rpg, 4.0 apg, and 0.5 bpg. The offense revolves around him and when he is having a game, the Salukis feed off of that and they are very difficult to guard. How they will do in the first round of the tournament and beyond will solely depend on how Domask plays.

Overview: Valpo has shown a lot of potential this season. They defeated Northern Iowa at home and have also nearly defeated Loyola Chicago and Drake in both of the meetings with these teams. However, they have just had an inability to close games out and compete at a consistent level all season long. Defensively, they have played very poor all season long, giving up 71.3 ppg. The good news for the Beacons is that they are going to be returning a really solid forward next year in junior Ben Krikke. Krikke has been solid this season, averaging 14.7 ppg and 4.5 rpg, both are leading the team. Although the odds of the Beacons making it past the first round is gloom this season, teams in the Missouri Valley Conference have surprised before. Maybe Valparaiso will be the next surprising team.

Overview: The Sycamores have struggled all season long to find any type of success in the conference this season. 9 of the 13 conference losses this season have come by single digits. They did get a really solid couple of wins against Missouri State and Bradley this season. Unfortunately, this season appears like it will be a let down for the Sycamores. However, the backcourt of Cooper Neese and Cameron Henry have been far from a let down this season. The junior guards have both shown serious promise this season averaging 15.9 and 14.9 points per game respectively. Although this year’s squad is likely going to get bounced in the first round, Indiana State has a great corps returning next year, and I think they will be a lot better off next season.

Overview: Illinois State started out the season with some potential for a great season. They played Wisconsin incredibly close the entire game and ended up only losing the game by four. They also went on an incredible stretch where they won 7 of eight games. Since that run? 3 wins in 17 games. The Redbirds have gone downhill and fast this season, and this has found them to be the seed that they are. It is a shame to see the Redbirds in the position they are considering how well guard Antonio Reeves has played this season. The junior has averaged 20.0 ppg (T-1st in the conference), 3.5 rpg, while shooting 39% from three off of 182 attempts. With the massive skid that Illinois State is in currently, things are looking glum for the remainder of their season.

Overview: Simply put, things have not been great at all for the Purple Aces this season. The most respectable win of their season is against Tennessee Tech, and both of their wins in conference are against Indiana State and Illinois State. They have twelve losses this season by double digits, and ten of those losses were by 20 points or more. They even just had a 51 point loss to Chicago-Loyola most recently. To make matters even worse for the Purple Aces, they are losing four seniors this year, including their top two leading scorers. Evansville have found themselves finishing 10th in the regular season in three of the last four seasons. Things need to change and quickly if the Purple Aces want to gain some respect from their counterparts in the Missouri Valley Conference.

You would be foolish to think that this conference is a no name conference, as they have proven several years that they can upset the best teams in March Madness and can make a run in the tournament as well. The conference this season has some teams that can keep this tradition alive for the conference, and whatever team represents the conference come tournament time should be taken seriously when filling out a bracket.