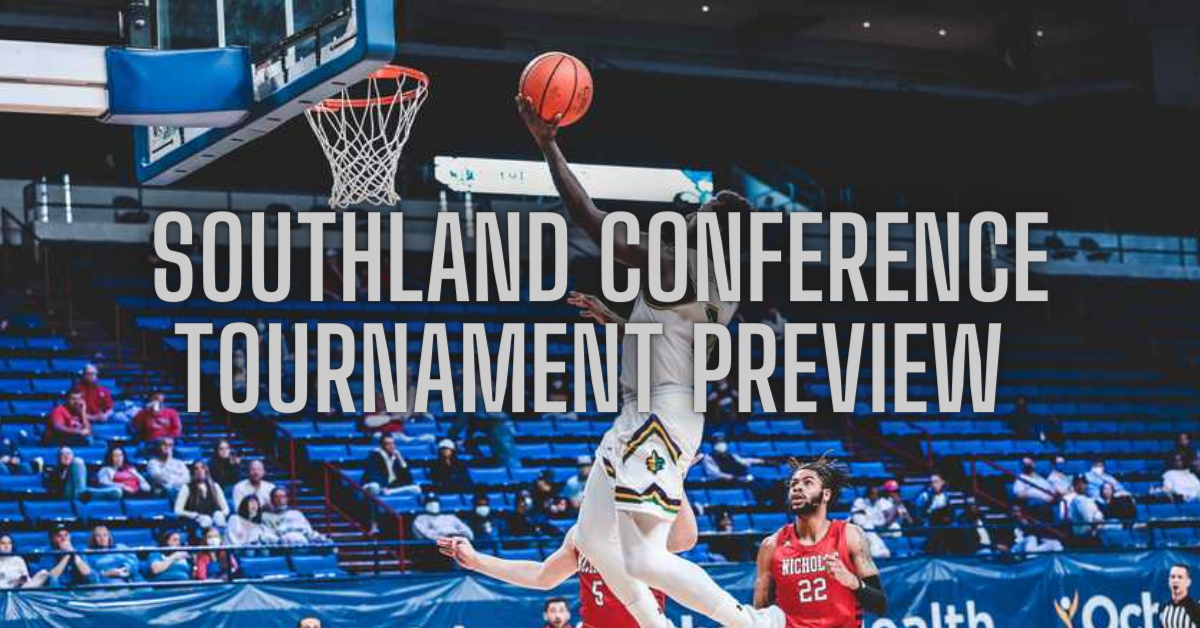 Although a conference that many think is full of one auto bid team that loses in the first round, Southland has had 6 March Madness wins since 1985. Still not ideal for a conference, but they have produced wins come March time. With the top 4 teams in the conference being neck and neck with each other, this is a conference that is wide open for just about anyone to win. Here are my predictions for seeding for the conference tournament and analysis for each team. Note: All records and trends are as of February 5.

Overview: Although they have shown vulnerabilities this season, the Privateers have shown to be the best team in the Southland and are my pick to win the conference. New Orleans had three games canceled in a row in early December due to Covid outbreaks with the other team. Since then, the Privateers have gone 10-1 and are on a 9 game win streak. This is a well rounded team that is led by Senior Guard, Derek St. Hilaire (20.9 ppg – Most in Southland Conference). This Privateers team doesn’t seem to be going into a slump any time soon and they could surprise whatever team they face, whether it be a first four game or a first round game come March Madness. .

Overview: The Colonels of Nicholls State are incredibly underrated. They have held their own with some of the best teams in the NCAA, losing to Wisconsin in Madison by only 3 points, losing to Purdue at Purdue by 14, and losing to TCU at TCU by 13. The biggest key to the Colonels’ success is their offense, as they are putting up 74.5 ppg, second most in the conference. Senior Guard Ty Gordon can be big thanks for that, as he is putting up 19.4 ppg (2nd in Southland behind St. Hilaire) and is shooting 37% from 3. Nicholls State has proven they can play with the big time teams, and don’t be surprised if they play New Orleans close come tournament time.

Overview: Southeastern Louisiana is a team that has played several teams in the Midwest, including my Iowa Hawkeyes as well as in-state rival Iowa State. This is a team that made Iowa work for a good chunk of the game and have athletes that make plays all over the floor. This team could very easily surpass Nicholls State for the 2 seed, as they swept them already this season. Nicholls State has a little more of a favorable schedule to round out the year, but Southeastern Louisiana can very easily be a team to watch and pull out a couple of upset wins come tournament time.

Overview: Outside of the Southland Conference, the Demons have struggled mightily against opposing teams. However, inside the Southland Conference, they have been very solid, with their losses coming to the three teams ahead of them (by 1 to New Orleans, by 11 to Nicholls State, and by 5 to Southeastern Louisiana). They now play host to all three of those teams and are 5-2 on the year at home. The Demons are VERY fortunate to have Freshman Center, Kendal Coleman (14.7 ppg – 5th in conference, 9.5 rpg – 2nd in conference) to stick around for a few more years. They may not win the conference this year, but don’t be surprised to see the Demons towards the top next year.

Overview: I know what you’re thinking, “Kyle this team is 16-7 overall, their betting trends are solid, how are they a 5 seed?” The Islanders have been dang impressive, so far this season, but have a brutal schedule to end the year. They have to play New Orleans on the road and Nicholls State twice. Those are three losses right there and just won’t be enough to get them higher than a 5 seed. However, to give credit where it’s due, Junior Forward Isaac Mushila (15.2 ppg – 4th in conference, 9.7 rpg – leads conference)  is super fun to watch. He’s always at the right place at the right time for rebounds, he finishes through contact really well, and is super aggressive defensively. My prediction is he will be the player of the year next year in the Southland and Texas A&M CC will be a top 2 team. For now, a 5 seed is where I think they land.

Overview: McNeese State has had several opportunities this season to prove they are a team to beat in Southland. However, they have been unable to pull away with wins in conference, as three of their 4 losses have come within 2 possessions of winning. They will have opportunities to show the conference what they are made of, as they have to travel to New Orleans and Nicholls State yet this year. They, like other teams I have done previews for, have several guys on the teams that can make plays, but they do not have a go-to guy by any means. Playing all 40 minutes and closing out games better is what is going to have to be key for the Cowboys to have a shot in the conference tournament.

Overview: Unfortunately for the Huskies, they just cannot find ways to get it done in the Southland Conference, and they have not been a high seed in the tournament since the 2016-2017 season when they were a 3 seed. The betting trends truly speak for themselves. The Huskies just are not even within reach of games they should be in, with one of their two conference wins coming to Incarnate Word who has yet to win in conference this season. It really is a shame for Senior Guard Darius Lee (16.2 ppg, 8.2 rpg, 2.8 apg, 2.1 apg – all leading team) as he is giving everything he has for this team to come short. He will need to play his absolute best basketball and then some come tournament time to give the Huskies even a remote shot.

Overview: Very tough season to put lightly for the Cardinals this season with their 4 wins coming to Houston Baptist (Neutral site non-conference game), Grambling State, Our Lady of the Lake, and Dallas Christian. Even with their poor record, they have still found ways to cover games at a near .500 clip, so they are far from an always-fade team. Injuries and Covid have also affected the Cardinals this season, with several of their star players missing multiple games due to injury or Covid. The good news for the Cardinals? They are returning 5 of their 8 main guys next year. At this point, they are playing for pride to end the season.

This tournament could be an exciting one. The teams in this conference play each other very close and the games always are filled with high-intensity. The school that gets the automatic bid will likely either play in a play-in game or have an incredibly low seed. However, when that time comes, I do not foresee a blowout by the team that has to play a team in the Southland Conference. This is a fun conference filled with passionate and talented basketball players who will surprise people come March.