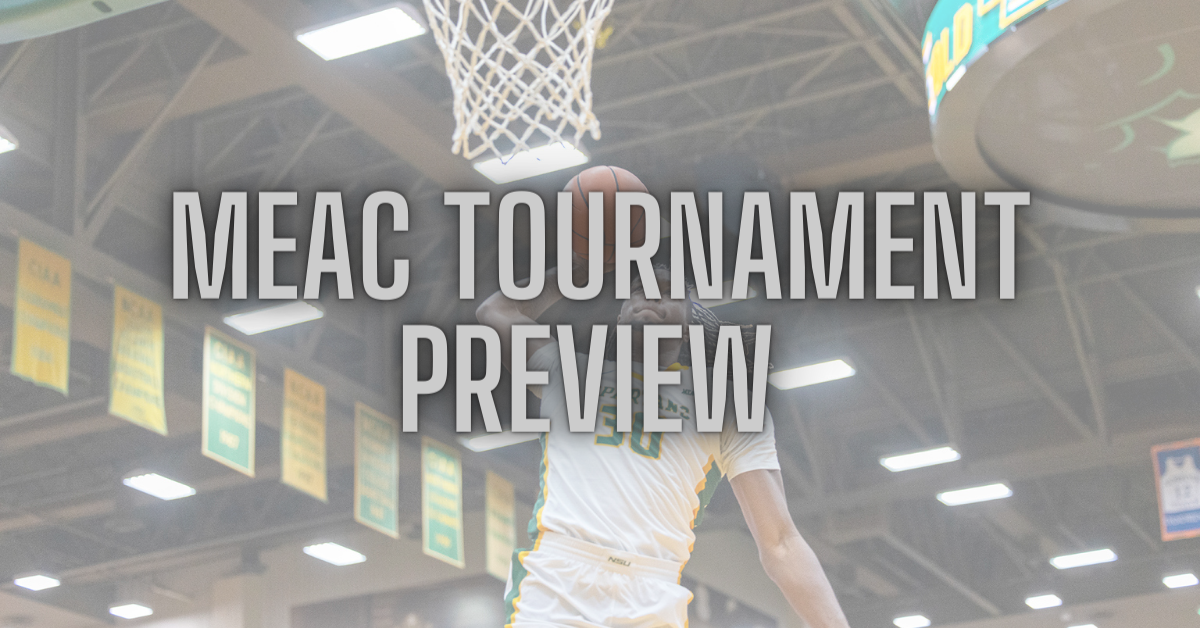 Unless you are a fan of a MEAC team, odds are you likely won’t pay much attention to the MEAC. However, the MEAC has been host to some of the biggest upsets in March Madness history. Let’s take a look at my projections for the seeding for the tournament. Note: Records and trends are as of 1/31.

Overview: Although they lost they had a tough conference loss to NC Central, this team is the best team by a large margin in the MEAC in my opinion. They beat the teams they should and they cover the games they should. Defense has been key to the Spartans success, as they have been averaging 7.6 steals per game. Led by Senior Guard Joe Bryant (16.5 points, 5.0 rebounds), expect the Spartans to be the team to represent the MEAC come March.

Overview: If there’s any team to take down the Spartans come conference tournament time, it’s the Eagles of NC Central. The squad has already taken down Norfolk State this year. This is a team that relies a lot on pressure, particularly in the half court. Their pressure is what has led them to victory in their games. They gave the Spartans fits in their matchup with this press, and this press could lead them to March if it continues.

Overview: Overall, the Bulldogs have the second best record in the MEAC. They have struggled as of recent in MEAC conference play but have the pieces to turn this season around. The Bulldogs have a young star in the making in TJ Madlock who is leading the team in points (11.8), assists (3.3), and steals (1.6). If he gets a head of steam and gets hot from the field, they could be potentially a team to surprise some people.

Overview: I know what you’re thinking: How can I have a team that is 4-16 listed as a 4 seed? The Eagles have taken on more Division I talent than nearly anyone in the MEAC and since MEAC play, the Eagles have been very solid. They have some weak spots in their offense, which is why I have them listed as a 4 seed, but if they want to have any success in this tournament, Junior Forward Tyree Corbett (14.9 ppg, 9.7 rpg) has to make himself known in the lane. The Eagles could very easily win their first round matchup and give the higher seed a run for their money in the semifinals.

Overview: Following a rough start to the season and about a month-long hiatus from games due to Covid-19, the Hawks have sneakily begun to find a groove. They have an impressive road win against Coppin State and a home victory against Morgan State. Although several of their wins have been against teams that aren’t in Division I, the Hawks are a gritty team that find ways to stay in games. They’ll be in for a long haul come tournament time, but I don’t expect them to go down without a fight.

Overview: The Bison round out the conference seedings solely for the reason that they are in every single game they play. They lost to top seed Norfolk State by only 3, defeated NC Central by 1, lost to South Carolina State by 3, lost to Coppin State by 2, and even lost to Notre Dame by only 3 points. The Big 3 of Guard Kyle Foster, Forward Steve Settle III, and Guard Elijah Hawkins are a force to be reckoned with and are going to be tough for whatever team they compete against come tournament time.

#7) Morgan State (7-11 overall, 2-4 conference): The Bears have struggled heavily in the MEAC thus far and have a very tough schedule to round out the year, thus missing the cut for the tournament.

#8) Delaware State (2-15 overall, 0-4 conference): Struggles, struggles, and more struggles all season long for the Hornets. Just not their year this year.

The MEAC is full of talent and gritty basketball. If there is MEAC basketball that is found on your TV, turn it on and watch to see what the hype of this article is all about!