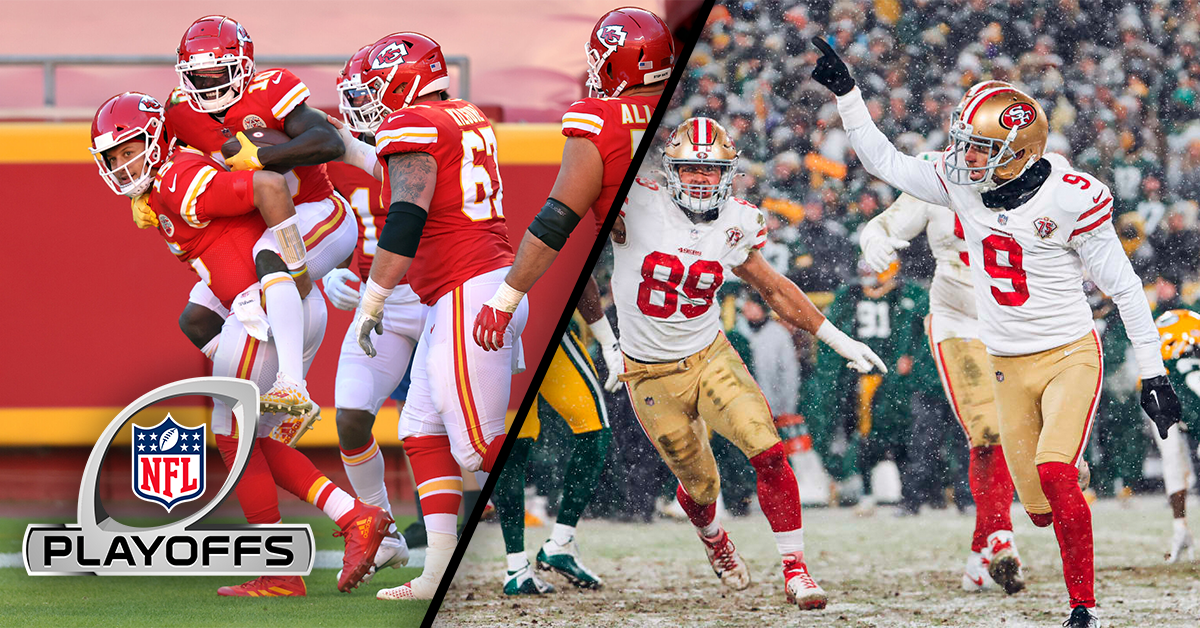 After being blessed with so many good games last weekend, how does Conference Championship Sunday look? I’ve got a few picks for today that I am very excited about.

First, our guy MereKat jumped on my podcast with me, you should check that out if you haven’t already.

🚨#NotAnotherNFLPod with @MereKatKat THE 🐐 is LIVE!🎙️
Let’s get some #ThankYouMereKat‘s in the chat. This is a banger, calling it now. On Youtube, Spotify, and iTunes Podcasts. Let’s have a Weekend.🤝https://t.co/lHDQeUj6sM pic.twitter.com/ydevt2y5fS

Let’s get to the games, and we’ll start with the AFC Championship game.

I think there are going to be some major points happening in this game. Joey Burrow has been going off all postseason long, and we just saw how many yards and points this Chiefs defense gave up to the Bills last week. I just can’t bet against the Chiefs after watching that game, they looked incredible on offense against a really stout Buffalo D. The Bengals definitely don’t have the defense the Bills did, so I could see this one getting out of hand. I hope it stays competitive just for viewing sake, but the Cheifs are that good in my opinion.

I like the Bengals, in fact, I may be taking Joe Burrow’s passing over and Tee Higgins receiving over. The Bengals to score plenty of points today, I love what they’ve been able to do in the playoffs. I just think there’s no stopping this Chiefs attack.

Kansas City put up 570 total yards last weekend and looked like the best team in the league. My only fear with them is they drank too much Champagne after that massive win and come out a bit hungover. I called it last week in my article that I thought that was the real AFC Championship, and it might have been the Super Bowl as well. Do the Chiefs overlook the Bengals today? I hope not.

I might be on this over just straight up as well. If either team gets up big the other team will be forced to throw the ball even more, which both teams are great at. This should be a really fun game. Gonna try to do Twitter spaces on my Twitter @PotatoGobbler at the half and the end of the game.

That’s right, the rare double teaser card. I love both of them so much sprinkled on the combination of all 4 which you can get at +255. #Value. I like the 9ers here a lot, might sprinkle them +3.5 too. They just seemingly own the Rams. On the surface, it can be hard to put your finger on it, but I think I may have it narrowed down. Head Coach and Offensive Line are 2 very important things people tend to overlook and the 49ers have great ones.

I’m just gonna watch this for the rest of the night.

Volume all the way UP pic.twitter.com/BtzUSKO0Dq

This 49ers offensive line will look a lot better vs this really good Rams front than the Buccaneers did last week. The Rams got after Tom Brady and were in the backfield basically all day. San Fransisco is more than up for the challenge. Also, Kyle Shanahan is one of the best coaches in football right now. The fact that he’s back here in the NFC Championship again by beating the likes of the number one seed Packers is just crazy. This is a coach that knows his team and puts them in a position for greatness.

I also think the Rams and all of their offensive weapons will find ways to score. My good friend @MereKatKat said on the Pod that he loves OBJ any time touchdown at +155 and I think that’s a great bet. Matt Stafford has turned a corner he looks to be very comfortable in this great Rams offensive system. I love SoFi Stadium overs, everyone knows that. #FastTurf.

This is a special one too because reportedly the crowd is going to be roughly 60% 49ers fans, if not more. It may seem like more of a home game for San Fran than anything.

I admit that I don’t love betting with Jimmy G, but he’s gotten them this far, and they have great weapons like Deebo Samuel and George Kittle to help him out. Kyle Shanahan and this great offensive line will take us to the promised land.

Let’s have a great day, get ready for those Twitter Spaces. Let’s go Points!