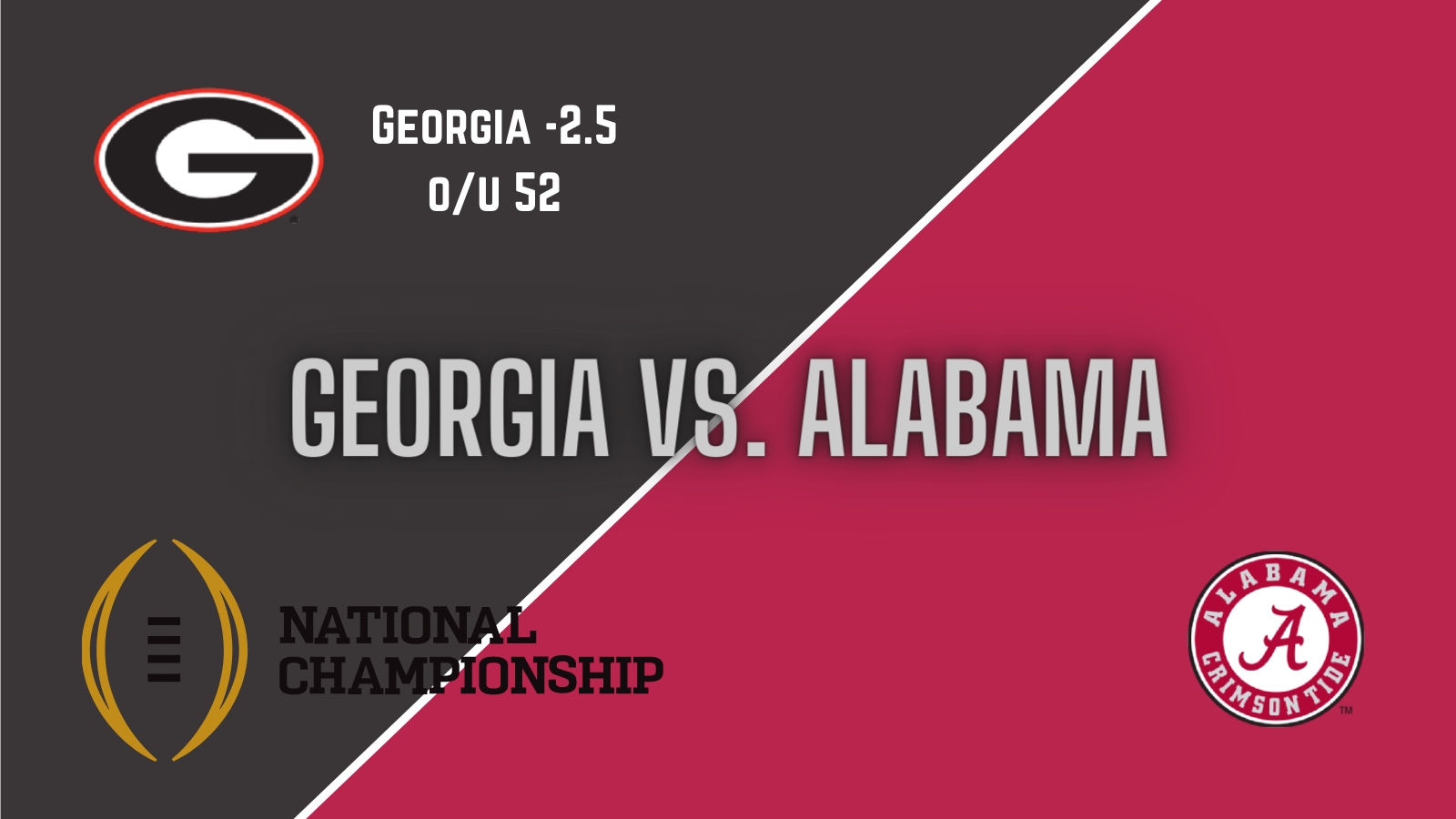 All season long, a good chunk of the crew here at the Kota Sports Gambling Network have had you covered with the College Football Central Show. Through the entire CFB season, the show has given viewers picks and analysis on over 200 games. The season has had its ups and its downs, as well as some surprises and blowouts. We have seen it all this season, but I don’t think there are many that are questioning the two teams playing for the national championship. They have been the two best teams all year, and it now comes down to this. There has been only one game that the College Football Central Show has not covered, but now is the time to cover it. The College Football Playoff Championship: Alabama vs. Georgia. These two teams met in the SEC Championship game this season, where Alabama came out victorious 41-24.

Alabama has shown it’s dominance this year, but has found ways to be vulnerable as well. They had a loss this year to Texas A&M and had a couple of close calls against both LSU and Auburn. Alabama has been average this season in terms of betting on them. They are 8-6 ATS on the year and 7-7 on the year at covering the over. Alabama QB, Bryce Young, is trying to top off a phenomenal Freshman season that included a Heisman Trophy for him. On the year, Young has passed for 4,503 yards, 46 TDs, and 5 INTs. Look for Young to try to link up with a future high round draft pick in WR Jameson Williams in this game. Williams has been Young’s favorite target, as he has 1,507 yards and 15 TDs this season. On the defensive end, the LB core for Alabama in Henry To’oTo’o, Will Anderson, and Christian Harris will absolutely be the key for the Crimson Tide defense to stop Georgia’s offense. This 3 headed monster has been the best LB core in the nation this season.

Georgia all season long was the team to beat for the championship, but definitely showed some weaknesses in their game against Alabama. Other than the loss to Alabama, Georgia’s only game won by single digits was week 1 against Clemson. Georgia has been really solid ATS on the year with a 9-5 record, and are below average in terms of over-under with a 6-8 record. Following the injury of JT Daniels, who many considered the preseason Heisman favorite, Georgia had to turn to Stetson Bennett. On the year, Bennett has 2,638 yards, 27 TDs, and 7 INTs. We will likely see Georgia’s TE, Brock Bowers, play a key roll in Georgia’s offense, as he is leading the team in both yards (848) and TDs (12). The big key for Georgia to win this game: Defense. Georgia statistically has been one of the best defenses in the country. The Bulldogs have playmakers at all 3 levels on defense in Jordan Davis (winner of the Bednarik award – nations best DL), Nakobe Dean (winner of Butkus award – nations best LB), and Derion Kendrick (4 INTs).

A lot of analysis was done by the CFB Central Show crew for betting on this game. Currently, the line right now is set at Georgia -2.5 and Over-Under set at 52.5. Not sure what the play for this game should be? Here are the crew’s picks for the championship game:

Kyle Kommes: All season long, Georgia was the team to beat. They were the favorites to win by a very large margin for most of the season. That was until Alabama came and pounded them in the SEC championship game. Beating Nick Saban in a national championship game is not an easy task, but I think Georgia has the potential to do it. Georgia’s defense will not play as bad as they did the first time. This team is going to come out with a fire underneath of them. I think that defense is going to give Bryce Young troubles this game and play like the #1 defense in the country. A little revenge will happen in the national championship game. The Pick: Georgia -2.5

Corey Adair: I’ve already been looking at this line. I will not be watching this game. F*** the SEC. The Pick: Under 52.5

Dan Angell: Georgia has had time to figure out what went wrong from last game. Alabama will not have John Metchie around to torture them this time. This feels like the moment for the Dawgs. The Pick: Georgia -2.5

Josh Campbell: It’s tough to beat a team twice, but I do not need them to win [to win the lock of the week contest outright]. +3 baby. The Pick: Alabama +2.5

Pace Maier: I hate Bama. You hate Bama. We all hate Bama. But it feels like everyone loves Bama to cover and win tonight against Georgia in the title game. Bryce Young is a monster. Love him or hate him, the dude is elite. He’s thrown over 4,500 yards, 46 touchdowns and just five picks. Just over a month ago, Bama beat Georgia 41-24 and Young threw over 400 yards and four scores. The older and wiser sports bettors preach, “It’s hard to beat a good team twice,” and they are correct. Everyone is on Bama I feel like. Just with the conversations I’ve had or have been hearing, everyone loves Bama. But I’ll let you in on a little secret, “If you love free money, take the Dawgs.” So, what am I going to do? Give me Bama +2.5 for the three NFL holos I dreamed about pulling this weekend. Never fade Mr. Nick Saban. Give me Bama ML too. I hate taking them but that’s the 100 percent correct play. The Play: Alabama +2.5 and Alabama ML

Nolan Meidinger (Pumba Cakes): I hate Bama, but any time you get Bama + money, you have to take it. This way, I’ll either be happy that Georgia won or I’ll win my bet. The Pick: Alabama ML

It all comes down to this. May the best team of the SEC win it all!

Message from Kota Capper CFB Central host, Kyle Kommes: Special thanks to all of those involved in the Kota Capper College Football Central Show this season. To DJ, Soup, Pace, Dan, BRuss, Corey, and Pumba, thank you everything that you all have done this season. It takes a lot of time behind the scenes to research every game that we discussed and what games to choose for the upset of the week and lock of the week as well. This season has been a lot of fun, and this show will be back next season! Peace out CFB bettors!