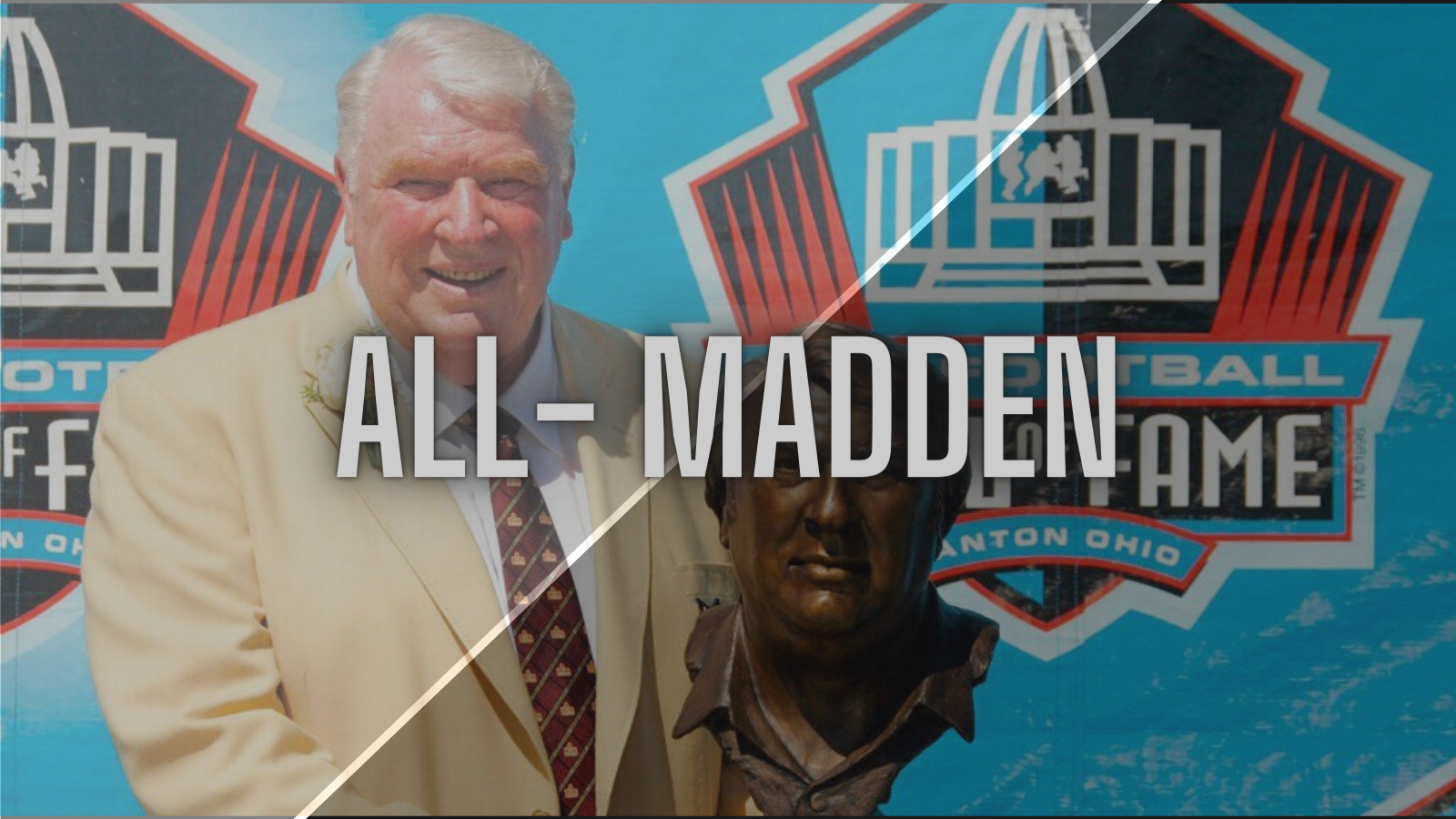 We can clap at this amateur pace
If that’s what’s crackin’, or we can play this on All-Madden

No matter how you know him, whether it be from his coaching the Raiders in the 1970’s, his commercials, his commentary between the big 4 Networks (ABC, NBC, CBS, FOX) or if you were an avid player of one of the many football video games that he lent his name, and expertise to, John Madden in many ways is the very embodiment of the game of football, and we lost a true titan of the sport in the last week of 2021. Tributes poured in immediately, as the sports world seemingly stood still, and football got a little less great for a while. The enormity of the game, and it’s looming over the rest of the American sports world will always be all encompassing and swallowing up anything in its path for the foreseeable future from a rating, and popularity standpoint, even as some parents pull their children away from the game as we become wiser about CTE, and the toll it can take on the human body. But the game itself, the fabric of two people smashing into each other, the echoes of John Facenda and Steve Sabol and NFL Films helping to craft stories of games and eras gone by, the BOOM, the Turducken, the Galloping Gobbler, it was John Madden who tied a thread between it all.

Whether it was being on the field for the heartbreak of the Holy Roller game that his Raiders lost to the Steel Curtain Pittsburgh Steelers or losing 5 AFC Championships in 7 seasons before finally winning Super Bowl XI over the Minnesota Vikings, whether it was Tough Actin Tinactin commercials, or commentating NFC football showdowns on Fox NFL Sunday, or Monday Night Football, or Sunday Night Football, you knew who John Madden was in some way shape or form, and he had an effect on your life. For a man who never wanted to do commentary, he molded himself into one of the best color guys in broadcasting, and his Madden Cruiser was a staple outside all the stadiums each time there was a big game in town. For a man that had an apprehension towards flying, it’s fitting that he chose to fly above his peers when it came to perseverance, and in painting pictures that helped shape our own sports memories. In my life I vividly remember him and Pat Summerall calling games on Fox between the San Francisco 49ers, and Dallas Cowboys, and in my mind, it felt like it was the Super Bowl every time I saw them play each other, regardless of if it was in the regular season, or the playoffs, because that’s the emphasis that Madden, and Summerall put on the games. In my young mind, I felt like the loser would be put to death by fire pit, simply because the stakes seemed that high, every time they were in the booth.

I know they say when someone you grow up with passes away, it feels like a piece of your youth dies with it, but for someone like Madden, who’s been in the scope of the public for the better part of 50+ years, this passing feels like a grandfather to some, a father to others, and a sage wiseman for the rest of us. I bet every one of us has a 6 degrees of separation type of connection to Madden, whether it be through a broadcast, or the video game, someone can tell you about Madden and how he affected their lives in some way. My earliest memory was Madden ’92, complete with the Receiver windows at the top of the screen when the QB dropped back to pass, and the ambulance that drove on the field during an injury stoppage (with players on the field, mind you) and seemingly murdering about 3 or 4 players En route to picking up an injured player. It was madness, and it was my first Madden memory. My next Madden memory was Madden ’94 for the Super Nintendo, that game had All Time teams on it, and I took great joy beating opponents with the Bears, complete with Walter Payton, and Gale Sayers as my running backs. I also remember my brothers making me play the All-Madden Team, who were A MURDERER’S ROW OF FOOTBALL SENTIENT BEINGS THAT WOULD RAIN MISERY, AND WOE UPON WEAK SOULS with one of the worst teams on the game, making me get shellacked because they knew I hated to lose. I would get my revenge on them though, I used to smack one of my older brothers with the Bills, and one of my all-time memories was a Bills vs Niners showdown where I caught a game winning interception in the snow and returned it to the house to win by 1 as time expired. I still hear him saying “NOOOO NOOO!!!!!!!” and me laughing like an 80’s cartoon villain saying “YESSSS YESSSSS!!!” as the joy drained from his soul watching my player cross the goal line.

In his induction speech, John Madden said, that he truly believed that the bronze busts that are in the hallowed halls of the Pro Football Hall of Fame in Canton, Ohio would come alive, and share stories about the game, and play in games against each other when they turned the lights off for the night. Every time there is an induction ceremony, I always envision the new players inducted standing like kids waiting to be picked when they choose teams. I wonder if they have an all-time QB, or if both teams have one each. I wonder if they use modern rules, or old school tear someone’s head off rules. What I have no doubt of though, is who’s gonna call the game’s commentary, because I know Pat Summerall, and John Madden will be in the booth…….that is of course after John coaches his team to victory. Rest well Coach Madden, you have molded many lives while on your path.