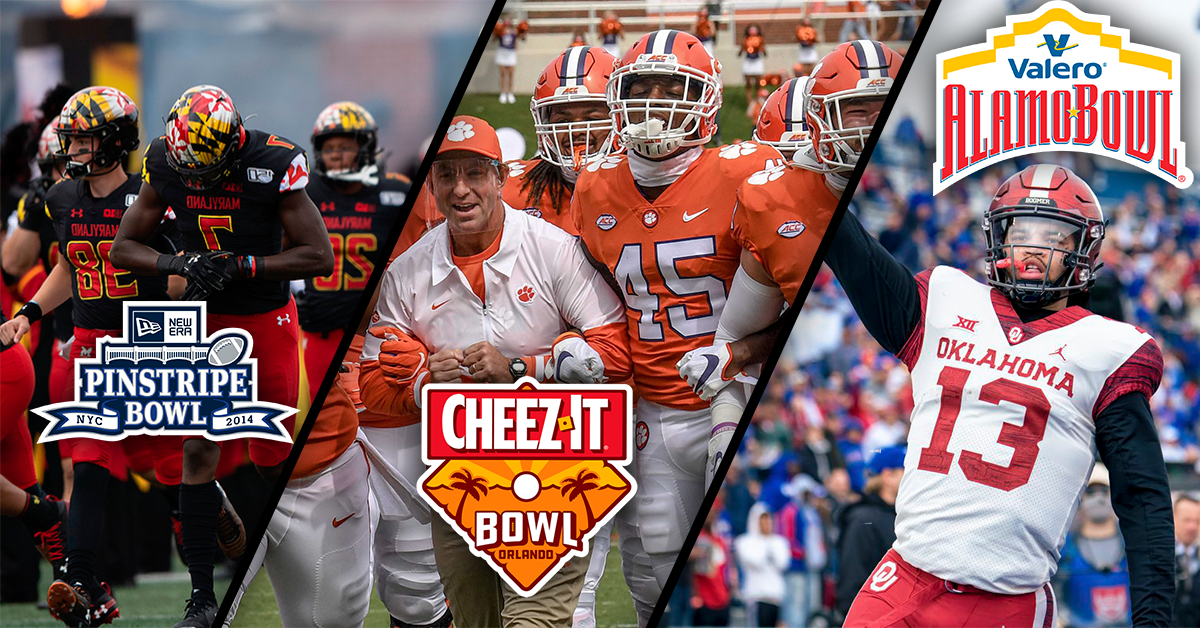 Finally! Some big time bowls. We have 3 pretty good ones today, and I’ve got picks for you guys.

First let’s take stock in both teams. Virginia Tech fired their coach Justin Fuente, JC Price will coach the bowl. The Hokies had 5 starters opt out, WR Tre Turner, DT Williams, DE Barno, CB Waller, G Smith. VT QB Burmeister will not play either he is in the portal. Maryland also had a few guys jump in the portal but none got playing time.

A huge thing to look for when betting College Football is often times just going with the better QB in the matchup. Taulia Tagovailoa (Tua’s brother) already had a massive advantage on VT’s QB Burmeister, but with him out the Terps have an even bigger advantage in the QB category. Burmeister started every game but 1 for the Hokies this year, and with him out we will no doubt see a bunch of mistakes.

Maryland is nothing special but average over 430 yards per game this season. Playing against a demotivated Virginia Tech team I expect the Terps to roll today. Let’s go Fancy Turtles!

It should be noted that I am NOT a Clemson (specifically Dabo) fan, but I think they are going to roll today. On paper, yes they lost both their Coordinators, but I think Dabo smartly promoted from within, so these players are playing for the coaches they’ll play for next year. The other big news out of Clemson’s camp, is the lack of news in Clemson’s camp. So far (a few hours before kick) we haven’t heard of any opt outs, or Covid protocol victims.

Iowa State on the other hand have several opt outs and transfer portal guys that aren’t going to play Wednesday afternoon. Star RB Breece Hall will be out in preparation for the NFL Draft. The Clones are down 2 wide receivers Scates and Milton who were contributors on offense, but not massive ones. Isheem Young (2020 Big 12 Freshman of the Year), starting CB King and LB Aric Horne have all entered the portal and will not be playing.

Clemson won 8 of their last 9 games, they scored 30+ points in their last 5. Thanks to star RB Will Shipley getting healthy and the emergence of RB Kobe Pace.

The talent disparity in this one is just far too large for me to overlook. We’re rolling with the hotter, more talented team. Go Tigers.

This is maybe the most interesting Bowl game we’ve had so far. Both teams missing a head coach, both teams have tons of opt outs.

The Oregon Ducks are practicing without 30+ of their scholarship players reportedly. Biggest loss of those being the future top 5 NFL draft pick DE Kayvon Thibodeaux. The Ducks will be without starting WR Devon Williams who is prepping for the draft, and starting CB DJ James has jumped in the portal. Oregon is reportedly missing so many guys on the Defensive Line that freshman Offensive Lineman have been getting reps at Defensive Line for depth reasons.

OU isn’t opt out free themselves, but the list is much much shorter than Oregon’s. The DLine was hit especially hard with the trio of DE Bonitto, DT Winfery, and DE/DT Isaiah Thomas all being out. OU also lost WR Hasselwood and TE Stogner to the portal, but neither guy were massive contributors to the Sooners offense.

Bob Stoops will be coaching OU for this game. Many will remember the game OU lost in Eugene Oregon on a botched onside kick recovery call, Stoops says he’s still not over that game.

Boomer Sooner, and Best of Luck!