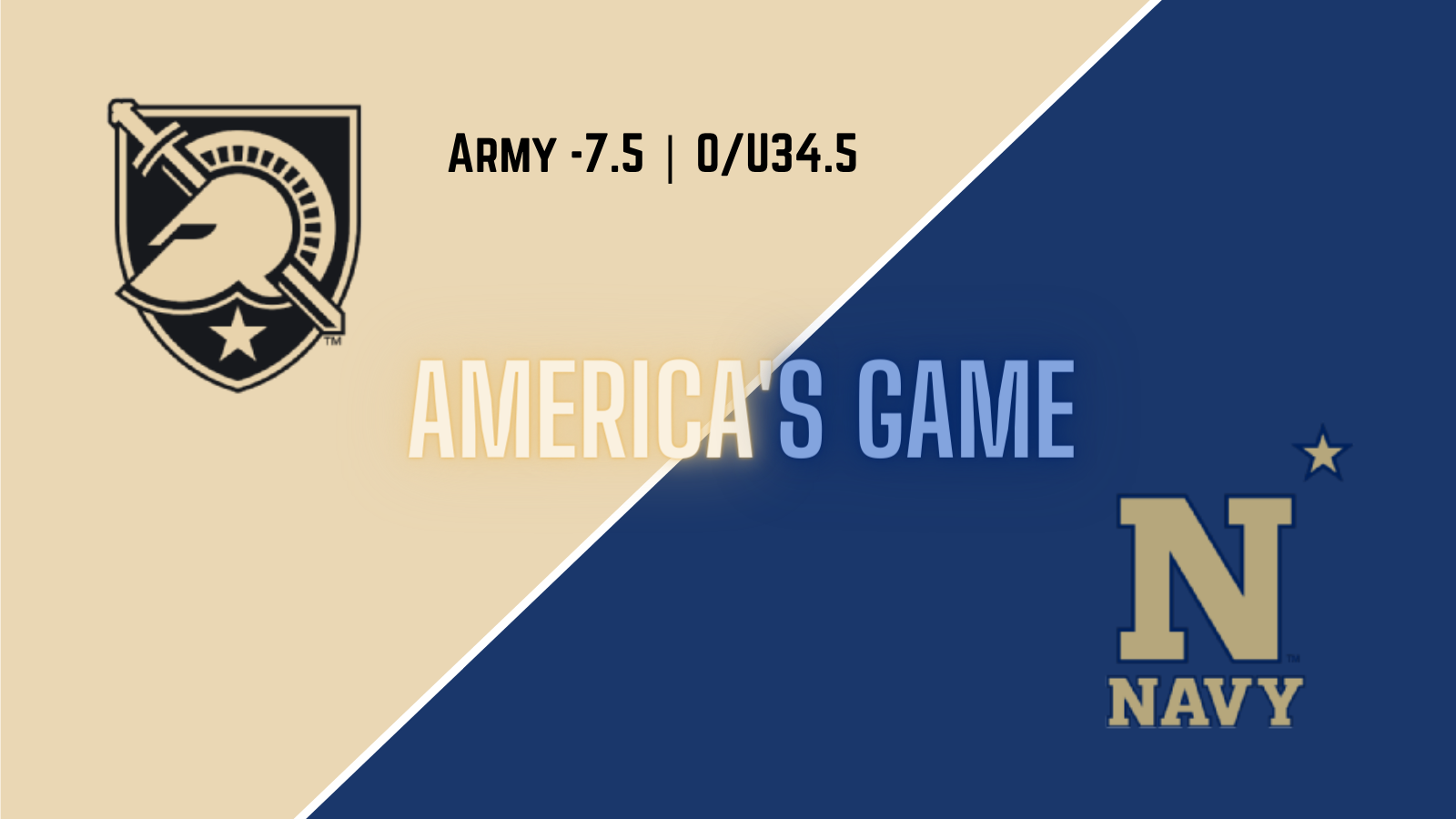 The crew has been working hard all year long. Since Week 0, the entire crew of Kyle, DJ, Pace, BRuss, Dan, Josh, Corey, and even Pumba have given you their locks for over 100 different college football games. With only one game this week, the crew will be taking the week off to prepare for the madness that is college football bowl games season. We couldn’t be more excited for that, so stay tuned.

However, there is one game this week that millions of fans, whether football fans or not, will be tuning into. This game has been referred to by some as America’s Game: Army vs. Navy. This is one of the oldest rivalries in college football with the first game being played on November 29, 1890. Currently, the Navy lead the series lead over the Army 61-53-7. This game has been played in several venues over the years and this year it will be played in East Rutherford, NJ.

Army is coming into this game with an impressive 8-3 record, with their only losses coming to Wake Forest (a game where a billion points were scored), Wisconsin, and Ball State. The Black Knights are led by Senior QB Christian Anderson who has passed for 545 yards, 5 TDs and no INTs. Pretty impressive for a guy who averages only 5 attempts per game. He is also second on the team in rushing yards with 519. That Black Knight defense is going to give everything they got against the Midshipmen run offense, as they are the 12th best team in the country in terms of rushing yards given up per game (110.2).

On the flip side, Navy is coming into the game sporting a 3-8 record. However, it should be noted that they were within a TD of beating Cincinnati, SMU, and Houston. The Midshipmen are led by Senior RB Isaac Ruoss who is leading the team in total rushing yards (608) and TDs (5). They also have a really impressive LB in Diego Fagot who leads the team by a large margin in tackles (85). Navy is not that far behind Army in terms of rushing yards given up per game, as the Midshipmen average only 131.6 rushing yards given up per game (31st in NCAA).

Currently, the line right now is set at Amy -7.5 and an Over/Under of 34.5. What is the play for this game? Allow the Kota Capper College Football Central Show team assist!

Kyle Kommes: I can see this game being incredibly close. The past 10 years, this matchup has been decided by a 1 score or less game 7 times. Navy’s record truly does not show how good they are. They could very easily have upset several teams that are in the top 25, including Cincinnati who is in the College Football Playoff. I do not know if Navy will necessarily win, but I do think they keep it close and competitive. It is very tempting to take the under, as I do think that a lot of the drives are going to be time consuming. I do think giving Navy 7.5 points should be taken. The Pick: Navy +7.5.

Brandon Russell: The under goes against everything that I stand for, but I don’t know the last time the over hit in this game. I am also sold on Army in this game. The Pick: Army -7.5, Under 34.5.

Pace Maier: These two teams run similar styles but Army is just better at it. I mean come on, Army has won more games in the past five weeks (four) than Navy has won all season (three). This pick is too simple. A dozen Black Knights have scored a rushing TD on the year. It’s like snow in the Midwest during winter, it keeps coming. It meaning Army’s rushing attack. Army is 4-1 straight up in their last 5 games and 5-2 against the spread in their last 7 games against Navy. What have you done for me lately? That’s what. It’s Army all day. All day. I’m so confident I’m going to take Army -7.5, Army Over 3.5 1st Quarter points, and a wild one: Navy 1st penalty (-120). I’m big on Army. I think this is a big game to make money on that is if you’re on the right side. The Pick: Army -7.5, Army Over 3.5 1st quarter points, Navy 1st penalty.

Dan Angell: These teams tend to play close games when they meet. Navy has played well the past month. Taking Navy +7.5 would have made you a winner in 28 of the past 30 Army-Navy games. The Pick: Navy +7.5.

Before bowl season starts up next week, be sure to tune in to one of the most historic and prestigious rivalries in all of college football. The game is being played Saturday, December 11 at 2:00 on CBS. Are you riding with the Black Knights or the Midshipmen?