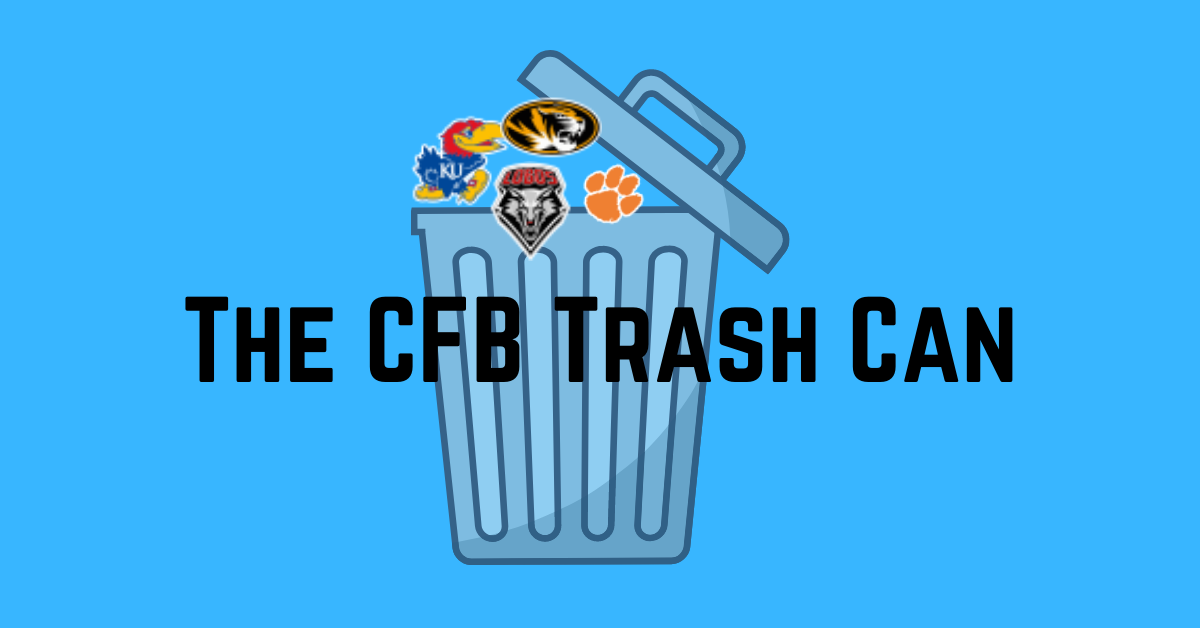 Don’t bet on bad teams. It’s that simple. Yet, week in and week out I find myself spending way too much time handicapping games that featured bad teams. There are four college football teams that are winless in the covering the spread column: Kansas (0-6), Missouri (0-7), Clemson (0-6) and New Mexico (0-7). Missouri is off this week but can any of the three other winless ATS teams cover this weekend? Let’s dive into it.

Kansas stormed the field this season. No, they didn’t beat a Top 5 team or even a ranked opponent. Hell, they didn’t even beat an FBS school but they still stormed the field. A win is a win I suppose. This week the Jayhawks host No. 3-ranked Oklahoma. Kansas beat South Dakota but failed to cover to open the season and then have been underdogs ever since. I wasn’t on this week’s Kota Capper College Football Central Show but my lock of the week is Oklahoma -38.5. The Sooners look like a different team since Caleb Williams took over and I expect him to have a field day against the Jayhawks. Williams is coming off a 295 yard, four touchdown performance against TCU where he hits 78 percent of his throws.

Clemson isn’t Clemson and I’ve been burned by them a handful of times this season because I keep believing in this horrific offense. Clemson’s defense is strong but its offense is real bad. This is the first game the Tigers are underdogs this year and Pittsburgh enters this game having covered its last three games as favorites. The under is 47 for this contest and while I like that, I don’t think Clemson gets the cover here. The Panthers defense has been inconsistent but they have a killer pass rush and they’ve been solid on third downs. At some point Clemson’s offense has to click, right? Not this week. This is going to be a close game all the way until the final horn but Pittsburgh has the better offense right now – even though Kenny Pickett struggled last week – and I think that’s enough for them to come out with a win and a cover here against Clemson.

New Mexico 20-point under vs. Wyoming

New Mexico can’t score. After putting up 27 and 34 points against Houston Baptist and New Mexico State to start the season, the Lobos have scored a combined 37 points in their last five games. I was high on Wyoming this season and I still am even though they’ve lost back-to-back games to Air Force and Fresno State as underdogs. The Cowboys haven’t been great against the spread, however. They are 1-4-1 and their first cover of the season was way back on September 18. New Mexico is on this list for a reason: they suck. But 20 points is too many against a Wyoming team that’s struggled as of late. Give me New Mexico and the points.