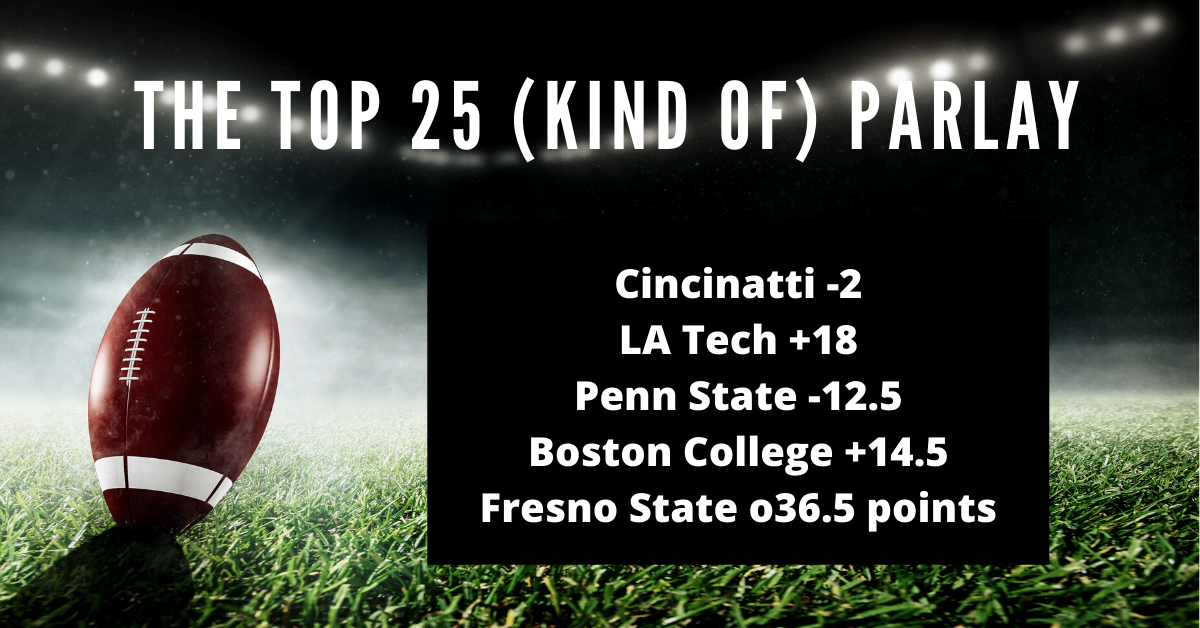 I don’t want to steal Dan’s thunder of being the “Parlay King” but I tweeted out on Friday that I’m going to hit a parlay this weekend.

My 4-way parlay yesterday had a chance but in the end it didn’t cash. Iowa hit the over by themselves against Maryland and a scoreless third quarter halted the over 65.5 in the BYU/Utah State game from hitting.

And I’ll say it again today, it may not be today but I will hit a parlay this weekend. I’m speaking it into existence. It will happen.

Side note: I think I’m 0-28 on parlay’s this year. (WordPress wouldn’t let me change the font of this sentence).

On Saturday, we have what I think is the best slate of games so far for the 2021 season. There are three Top 12 matchups along with another Top 25 matchup with #21 Baylor set to take on #19 Oklahoma State at 6 p.m. at Boone Pickens Stadium. The Cowboys getting no respect this season after taking down Tulsa, Boise State and #25 Kansas State.

There’s not only opportunities to make money with these Top 25 matchups but there’s some games in the weeds that I love.

I’m not a big parlay guy because I’m horrific at trying to get more then two teams to cash a ticket for me but this weekend my sad stretch comes to an end.

Let’s call this the Top 25 parlay minus the fact that LA Tech and Boston College are not ranked in the Top 25.

Why Cincinatti can cover:

Can the Irish win this by throwing the ball? Cincinnati has come up with six interceptions in the last two games, and Notre Dame quarterback Jack Coan is still limping around but he’s expected to play. The Bearcats have the offensive line to hold up against the great Notre Dame defensive front and their defense has been solid in the red zone.

Why LA Tech can cover: LA Tech could be 4-0 instead they are 2-2 because they are so damn inconsistent. NC State is coming off its largest win in quite some time, so I think this is a letdown spot for the Wolfpack. LA Tech should have time to go through its reads on offense with how little pass rush NC State generates.

Why Penn State can cover: Penn State might be overrated considering they beat a team in Wisco that can’t score and Auburn probably should’ve lost to Georgia State but Sean Clifford is the man. He’s completing just over 75 percent of his throws over the last three games and Indiana does not have the horses on defense to keep up with Clifford’s consistent play.

Why BC can cover: I debated putting this game in the parlay but how can you not bet against Clemson right now? Clemson wins but Boston College covers.

Why Fresno State can cover: Fresno State gave us a scare last week with that slow start against Utah State but Jake Haener busted out for five touchdowns after his team trailed UNLV 14-0 after the first quarter. Here’s the big stat: Hawaii’s pass defense has allowed close to 300 yards per game over the last four contests. Fresno State has hit the over in its last three games and they’ve scored over 35 points in each of those three games.