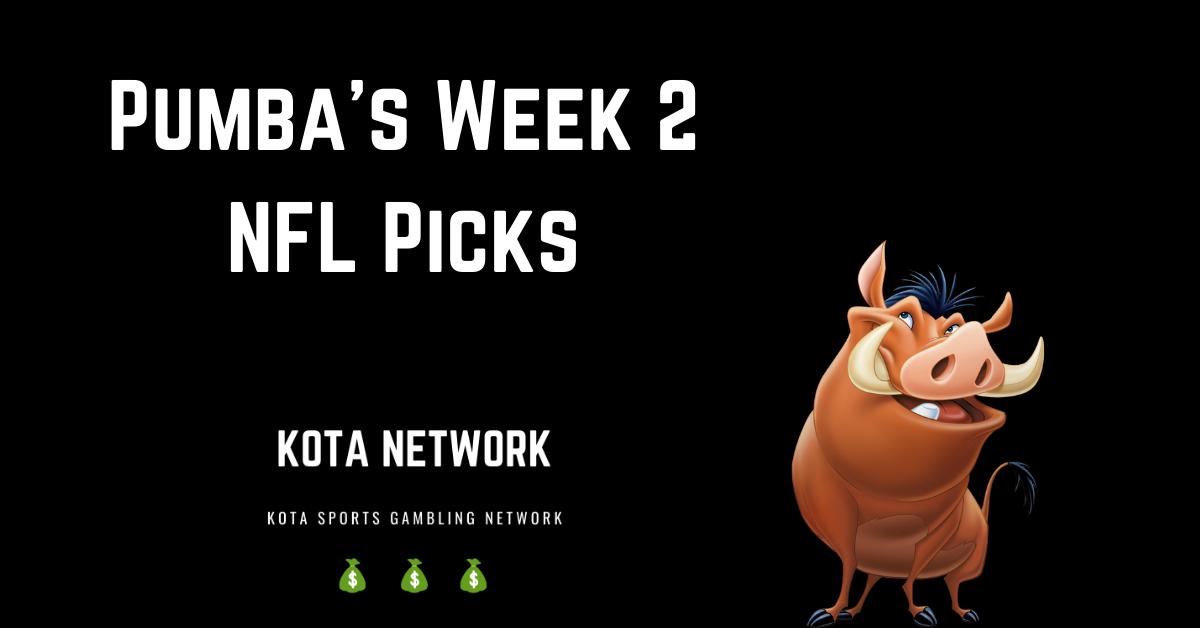 After starting the NFL season with a win on opening night, my remaining picks for the week went a dismal 0-4. Week 1 can obviously be a bit of a guessing game but I still feel embarrassed by the poor results. Hopefully with a week’s worth of results I can get a better sense of who’s legit and who’s not.

Tough to bet on a team that lost by 20 in week 1, but the Bears looked better than the final score showed. Facing a very good Rams defense on the road, the Bears averaged an impressive 5.2 yards per rush and managed to get every possession into Rams territory except their final drive of the game. Meanwhile the Bengals did manage to get an overtime win at home but it was against the pathetic Vikings who only had a measly 12 penalties for 116 yards. Assuming the Bears can avoid that and they fix some of the blown coverages from Week 1, they will get the win at home.

Last Saturday I was at a wedding dance where I had someone tell me that Titans -3 was a lock. Now maybe it was all the Busch light and Peach Crown in my system but I decided to trust this guy that I had never met (KotaCapperPace vouched for this guy). Unfortunately, this pick could not have come further from hitting. The Cardinals went into Nashville and dominated the game from start to finish and honestly I can’t believe they aren’t favored by more this week. As mentioned earlier, the Vikings managed to have over a football field worth of penalty yards in week 1 and I imagine the Cardinals D-line forcing another handful of holding penalties and making Kirk Cousins miserable during this game. Now I’ve watched enough Vikings games to know that they somehow always manage to screw up every bet I have on or against them so I’m not quite putting my entire bank account on this game but multiple units may be necessary.

The Cowboys looked very respectable in their Week 1 loss to the defending Super Bowl champs. As expected they have lots of offensive firepower but the defense is still an issue for this team. The Chargers were a little more dominate on the stat sheet than the scoreboard in their 4 point victory over the Football Team but I’m not going to respect a close victory over a team lead by Taylor Heinicke. With 3 extra days rest, I like Cowboys getting an entire FG on the spread and I’m also going to be hitting Cowboys ML.

I feel that Big Ben and the Steelers are getting a little too much respect for a week 1 victory over the Bills in which they were outgained 371 to 252. Steelers managed 0 first half points, but thanks to a blocked punt, were able to make a 2nd half comeback. Meanwhile, the Raiders had a league high 491 yards of offense in their wild comeback victory over the Ravens. I think their offensive success continues this week to keep this game very close with the Raiders having a good chance to not only cover, but win outright.

Both Patriots -6 and Under 42.5 don’t seem like bad plays for this game but making a teaser makes both bets a little more comfortable. Last week the Patriots managed to lose to the Dolphins despite outgaining them 393 to 259 in the game. Bill Belichick doesn’t lose to rookie QBs and I don’t see that changing this week. The Jets are a terrible organization that thankfully were just good enough last year to let my Jaguars get Trevor Lawrence. With 2 rookie QBs the under feels safe with my only fear being that the Patriots do too much scoring themselves.