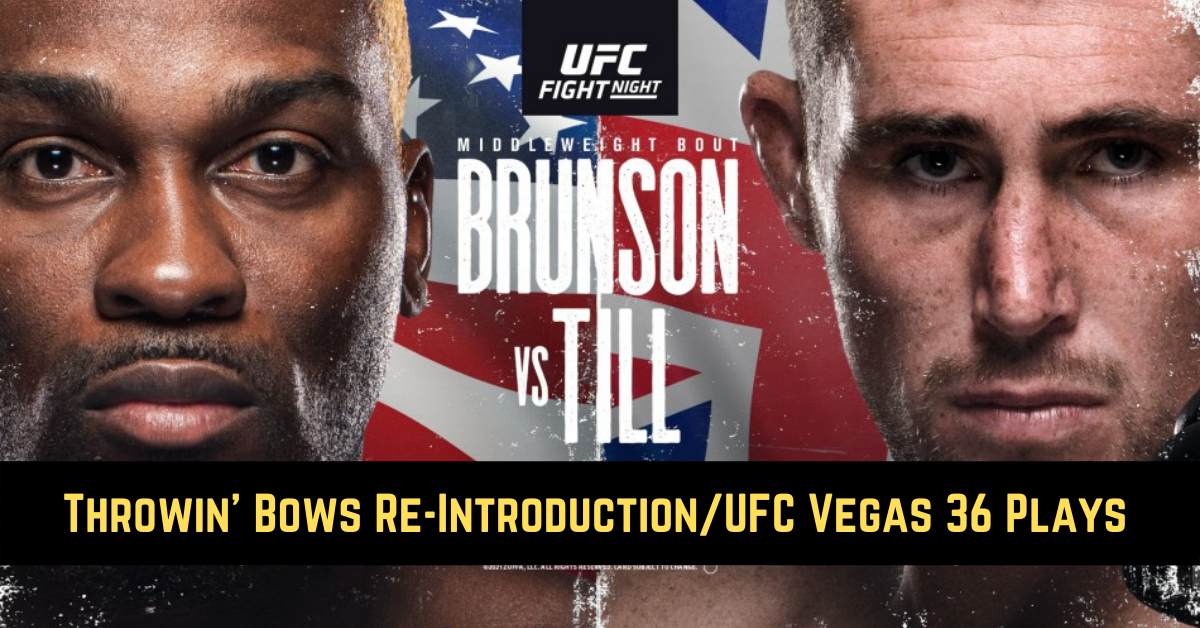 In the wise words of famous orator Shawn Corey Carter, or “Jay-Z”, “allow me to reintroduce myself”. Throwin’ Bows is back in a big way. Some of you might remember me (Josh) and my partner in crime (B Russ) had a brief YouTube show together that lasted two episodes. Well, fast forward about 5 months and we are partially back. B Russ will no longer be a co-host of Throwin’ Bows but I have faith he will be able to be a guest on many shows and give input through Twitter like always.

Long story short, Throwin’ Bows has returned and will be uploading Ep. 1 of the Podcast in the coming weeks. For now, I thought there is no better way to come back than a blog. The way I am planning on typically structuring these blogs is a breakdown of the main card fights and any featured prelims, my pick(s) for the fights, and a no explanation prelim picks section. With all of that being said, let’s get into UFC Vegas 36, Till vs. Brunson.

This is a classic hype-train making his UFC debut in Paddy vs. a guy on a little bit of a skid in Luigi. Paddy has been hyped up more this week than I’ve seen in a UFC debut in a long time. He is 16-3 all time and has fought in Cage Warriors most of his career. His most notable opponent (and win) coming in the form of another fighter on this card, Julian Erosa.

Luigi Vendramini needs a win. He is 1-2 in the UFC (9-3 overall) with 1 win by KO, 1 loss by KO, and 1 loss by decision. I think this should be an even money fight. Paddy will need to get this to the ground and I don’t think he is strong enough to work Luigi on the ground. It should be a good fight but you’re truly paying for the name if you pick Paddy here and I think Luigi gives him a warm welcome to the UFC and gets the job done. I think it will go to decision and you’ll se a little extra juice there but I’m taking Luigi straight up.

Honestly, I hate this fight. All we can hope for here is violence. I believe Bukauskas is a little overrated. He’s 11-4 overall including 1-2 in the UFC and 0-2 in his last two (granted, one was against Jimmy Crute). Luckily for Bukauskas, he draws Khalil Rountree Jr. who is 8-5 overall and has been in the UFC since 2016 where he is 4-5. Rountree actually announced his retirement in December of 2019, just three months after a KO loss to Ion Cutelaba. He announced his return in November of 2020 and fought at UFC 257 and lost a decision.

Rountree looks much better now in training but if he doesn’t let his hands go and hurt Bukauskas early, he could be in for a long night. Both of these guys will for sure look for the finish and I don’t see this lasting very long. If you have the prop available, take ITD (Inside the distance). But I will personally be playing this to end early.

Alex Morono has been in the UFC since 2016 and has been extremely active since then. He is 19-7 overall and is 8-4 in the UFC. He faces David Zawada who is 17-6 overall and 1-2 in the UFC. I don’t have a whole lot to say about this fight other than the fact it’s nice to see Morono not fight someone with a ton of UFC experience unlike his last two fights against Anthony Pettis and Donald Cerrone. Morono is versatile and has a cardio advantage and unless Zawada can hold him down, Morono should look good in this fight. I can’t pick against Sayif Saud and Fortis MMA so I love Morono here by decision but I’m going to just take him straight up.

Tom Aspinall has burst on to the heavyweight scene since making his UFC debut in July of 2020. He is 3-0 in the UFC with two KO’s in 45 seconds and 1 minute and 35 seconds as well as a second round submission win over Andrei Arlovski. Aspinall is 10-2 in his MMA career and has never been out of the second round.

Aspinall goes up against “The Polar Bear”, Sergey Spivak this Saturday. Spivak is 13-2 overall and 4-2 in the UFC including a submission victory over Tai Tuivasa and most recently a lackluster decision victory over Alexey Oleynik. A lot of money has been coming in on Spivak recently and I understand why. Aspinall is a monster but we haven’t seen him past round two and he even looked tired late round one against Arlovski. If Spivak is able to drag Aspinall to the later rounds he might be able to get a decision win or a finish but Aspinall is going to come out hot and I don’t see this lasting long. I don’t see the value on Aspinall at -240 but I do like the under, if Aspinall gets it done, I think he gets it done early.

I’d like to preface this section by saying I am one of, if not the, biggest Darren Till fan of all time. How could you not like the guy? He’s hilarious and his fights almost always bring fireworks. I would also like to say I am a realist. I think there is a misconception about Till that he puts people to sleep every victory.  Of Till’s 6 UFC wins, only 2 have been by knockout. One of those being in 2015 and the other being against Donald Cerrone. Till did drop Robert Whittaker in his last fight but overall, he hasn’t shown that power. It would be one thing if he was throwing a ton of volume but he just has not been letting his hands go recently.

On the other hand, Derek Brunson has been on a tear. He is 4-0 in his last 4 and against very solid opponents as well. Brunson has been getting his hands on people and just not letting go. He looks great and to me, a lot of people are underrating him in this matchup. I expected this opening up to be close to even money. That’s alright with me, especially with how Brunson has performed as an underdog recently. I think Brunson gets this done unless Till lets his hands go which I don’t see happening unfortunately. My heart lies with Till but my heart doesn’t make me money. I expect Brunson to take this the distance and get the win.

Let’s have a great weekend and win some money!