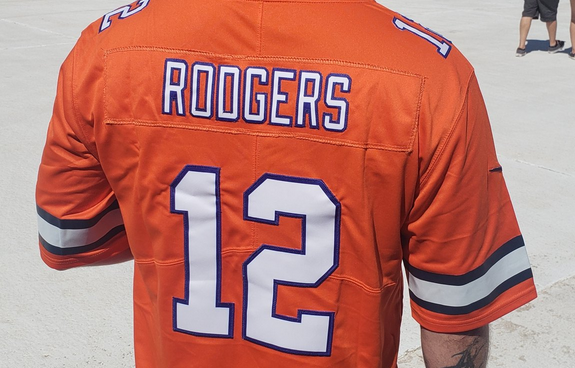 Ryan, let’s play future predictions. Who wins the most games for the Broncos at quarterback: Teddy Bridgewater, Drew Lock or Brett Rypien? Bonus: Over-under at 13 wins with Aaron Rodgers?

Here was O’Halloran’s answer: “Most wins this year for the Broncos: Lock, but Bridgewater will also win at least two games as the starter this year. Projected wins if they get Rodgers before Week 1: When the schedule came out in May, I predicted a 15-2 record with AR12 at the controls.”

As a Minnesota Vikings fan, I want Rodgers out of the NFC North faster than I wanted my boys out of our basement after watching American Pie back in the day. But if he does get shipped to Denver, there’s no shot in hell that the Broncos win 15 games.

Ryan, you’re telling me that Rodgers who hasn’t won 88 percent of his games in a single season since 2008 is going to stroll into Empower Field at Mile High with his greasy hair and take Denver to the promise land? I just don’t see it. The Broncos will have a top tier defense and their offense features more weapons than Rodgers has ex-girlfriends, which I was surprised to find he didn’t have more. Regardless, this team has weapons. But a lot of NFL experts think Denver is a middle-of-the-pack to bottom 12 team. Getting AR12 would obviously shoot them up in those rankings tremendously but to say they’d win 15 games is crazy talk. Kansas City has an O/U win total of 12 for the upcoming season. The Broncos have a win total of 7.5 currently. If Denver gets Rodgers and the teams win total changes to 13 or 13.5 would you feel confident taking that over even with the extra game on the schedule?

Who’s to say Rodgers’ lady (Shailene Woodley) would even approve a trade to Denver? They may be engaged but she claims there’s “no rush” to marry Rodgers and you know that’s just flat out false. Woodley even claims sex scenes where women wear bras are unrealistic. I’ve clearly been doing it wrong my whole life. Bras are the most difficult piece of clothing to remove, Shailene. Any who, Ryan is a Broncos beat writer. I get he has high hopes for the team he covers if they get Rodgers. But buddy, don’t be unrealistic like Shailene.