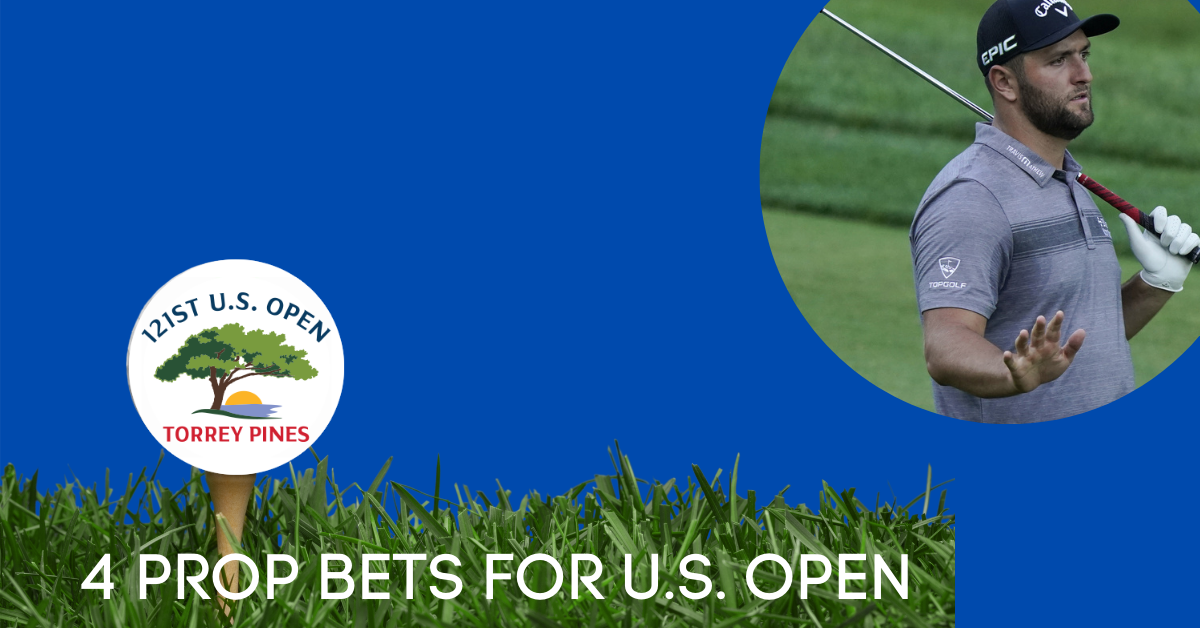 I don’t know what’s more interesting about the U.S. Open course (Torrey Pines) that it once was a military training camp in 1941 or that it once was a racecourse in 1956. Either way, the golf course that is named for a tree (Torrey pine) and a man (Dr. John Torrey) will host the 121st U.S. Open starting Thursday.

A few weeks ago, I changed my Twitter name to Prop Bet Pacer because I couldn’t miss with a prop bet. I was 9-0 and my first loss came when Kevin Huerter decided to score eight points and not nine to cash me my o8.5 points prop, however, since May 28 my prop bet record is 12-5 but I should also tell you I’m 6-15 in my last 21 bets.

Don’t tell me I didn’t warn you.

Here are my four favorite prop bets for the U.S. Open. Don’t forget sports gamblers, tee times start at 6:45 a.m. (CT) on Thursday (6/16). You don’t want to be that guy telling his buddies at the bar, “I wrote these prop bets down but was too lazy to get out of bed to place them.” Just get your damn bets in people.

There’s a lot of talk about Phil Mickelson this week. Coming off his PGA Championship victory, his odds to win at Torrey Pines are +4000. But the prop bet I’m eyeing here is Mickelson to miss the cut at +110. He’s missed the cut in five of his past 12 events and in two of his last four U.S. Open appearances. I can already see it. Mickelson will be interviewed after missing the cut this week and in his post Day 2 round press conference he’ll respond with, “Yeah, I didn’t play well. But I won the PGA, so…” How long can he use this as an excuse to miss cuts?

There have been 46 holes-in-ones at the U.S. Open. Patrick Reed one-hopped into the par 3-seventh last year at Winged Foot. Phil Mickelson does have an ace at the U.S. Open, however, Tiger Woods despite having 20 holes-in-one does not have one at the U.S Open. He’s got you there, Tiger. Will there be one this week? I hope so. Cheering for zero hole-in-ones is like taking an under in any sporting event. Nobody wants to cheer for less points and nobody wants to cheer against someone acing a par-3 and celebrating like this kid’s mom did back in 2020.

Things you love to see:

You knew it was coming. The biggest rivalry in golf. It’s a damn shame these two aren’t playing together. While I respect the PGA Tour for reaching out to each of them to see if they’d be interested, I still think this pairing should’ve been added to the PGA Tour Rule Book. If Brooks Koepka and Byrson DeChambeau show up at the same tournament, they play together. You just have to make that happen. That’s it. Mic them up. Purchase a DirecTV channel dedicated just to the Brooks vs. Byrson beef. Golf and sports need this content. DeChambeau took the trophy by six shots in last year’s U.S. Open, while Koepka has two wins and a runner-up in his last three U.S. Open appearances. I’m team Byrson, so I like him in this matchup.

This is pretty much impossible to predict but I guarantee no one is winning this year by 4 or more strokes. Imagine this, Jon Rahm standing on hole 18 on Sunday evening with a two stroke lead. Paul Casey needs to sink his 28-foot birdie putt to pull within one stroke of Rahm but that doesn’t happen. Johnny Boy has a 12-footer for par, up two strokes but plays it conservative and bogey’s the hole only to win by one stroke. Can I predict the future? My high school teacher asked me what I wanted to be in 10 years back in 2012. I turn 28-years-old in under a month and I’m not retired living on my own island with 6 cows, so no, I can’t predict the future but I like the winning margin this week to be one stroke.